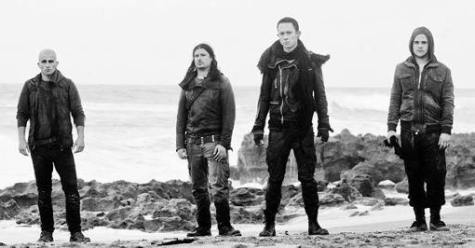 PitCam.TV conducted an interview with guitarist/vocalist Matt Heafy of Florida metallers TRIVIUM at this year's edition of the With Full Force festival, which was held June 29 - July 1 at Flugplatz Roitzschjora in Löbnitz, Germany (near Leipzig). You can now watch the chat below.

In a recent interview with Sweden's Metalshrine, Heafy stated about TRIVIUM's plans for the next album, "We have nine songs pretty much completely recorded as pre-production, recorded on our bass player's laptop, and it actually sounds better than our first record. Paolo's [Gregoletto] really good at recording shit. It's all programmed drums, but programmed in a way that Paolo programmed the bass part, like the underlying drum tracks and Nick [Augusto, drums] would sit with him and rewrite them, but on the computer. We tracked guitars, we tracked bass and we're gonna track vocals soon, we tracked solos and I've got an album title, album arts, song names. We've got about 15 songs and everything's planned out. Video ideas, photo shoot ideas, everything. But we just can't reveal anything."

When asked about who will produce the next TRIVIUM album, Heafy said, "We don't exactly know. We've got the plan, but we can't reveal. It's also kinda far to tell, but it will be different again. The new stuff sounds amazing and I know every bands says that, but yeah, it's really great. The fact that we're all working on it so much already, we know that it's something really special."

TRIVIUM, AS I LAY DYING, CALIBAN and UPON A BURNING BODY will join forces for a European tour this fall.

TRIVIUM's latest album, "In Waves", sold 22,000 copies in the United States in its first week of release to land at position No. 13 on The Billboard 200 chart — the highest U.S. chart entry of the band's career.