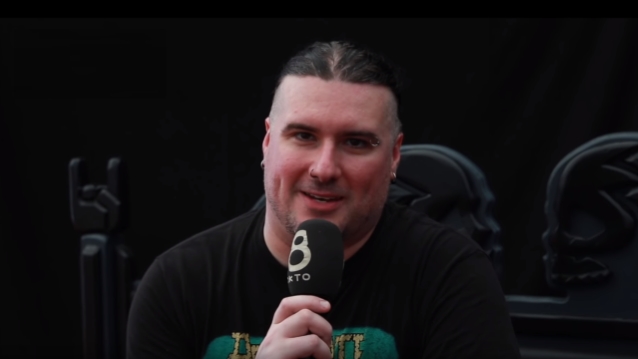 Prior to TRIVIUM's performance at thus year's edition of Austria's Nova Rock festival, guitarist Corey Beaulieu spoke with Alice of Mulatschag TV. The full conversation can be seen below. A few excerpts follow (as transcribed by BLABBERMOUTH.NET):

On whether he'd like to contribute more to TRIVIUM's lyrics:

Corey: "No. I've written some lyrics on old records, but that's not really been my thing. Matt [Heafy, guitarist/vocalist] and Paolo [Gregoletto, bass], they both sing, so they're more competent with writing vocals and lyrics and stuff like that. I've always just been more focused on contributing to the music. A lot of the melody stuff I do, I just write it on guitar because I don't sing. I come up with a songtitle here and there, but I just let those guys handle it. They have their little method and process of what the song needs for a theme or lyrics and stuff like that. We have a really good songwriting dynamic where we all contribute, and then there's certain things that other people kind of like, that's their forte. I just let them do their thing. Paolo's really great with coming up with cool lyrical themes. He reads a lot of books, so he always has a lot of really cool, interesting takes on trying to make the lyrics as interesting as possible. Matt, before on a lot of the records, he would just do it all himself, and then the last couple of records, Paolo's jumped in and really helped take a little of the weight off of Matt's shoulders from having to write a full record full of lyrics. It's easier when you don't have to rack your brain and try to write lyrics for 12 songs, and you can collaborate and work together to make it a little bit easier... If I did have an idea for lyrics, I'm sure they would be open to it, but I don't really need to. I'm not really into writing lyrics. I think the last time I wrote lyrics to a song was 10 years ago, so I'm a little rusty at that."

On his favorite guitar solo by Slash:

Corey: "That was, like, my first band I ever got into... Off the top of my head, I always really liked the 'Nightrain' solo, and 'You Could Be Mine' and 'Double Talkin' Jive'. Pretty much, you can take any solo from 'Appetite From Destruction', and it's a classic. If I can remember right, 'Appetite' was the first record I ever bought with my own money. GUNS N' ROSES was the only band I knew about for a couple years when I was a kid, so I listened to that record to death. It was my first band that I got into that got me into rock/metal, and that was the gateway to learning about METALLICA and MEGADETH... It went from there to all the thrash stuff to [IRON] MAIDEN to death metal and everything like that. I still have a fondness for GN'R, and still haven't seen the reunion yet, so hopefully I'll be able to catch that some day."

On his guitar collection:

Corey: "I think the last time I counted, I had, like, 70-something, but over the last few years, I haven't really gotten any new guitars, so the collection has kind of stagnated for a bit. All my guitars that I've used throughout my career, all of them hold some kind of different sentimental value. That's why I have so many, because I don't sell anything — I just keep it all. I horde all the guitars in my closet. They'll always come in handy. There's some stuff I used on tour a little bit, and some stuff, I used on albums that make it special. I know which guitars I used on certain albums or songs that make it a little part of history for me... Some other stuff, I collect — just certain guitars I've always wanted to have. I have an Yngwie Malmsteen [Fender] Stratocaster. I don't play Strats at all, but I always wanted to have one, so I bought one of those. When you're a guitar player and a guitar nerd, there's never enough guitars to own. [Laughs]"

Corey: "It's a cool name. To have a one-word name that kind of stands out from being a non-typical metal band name is kind of cool, because it kind of in a way gives us the freedom to do a bunch of different stuff with our music and not be stuck having to do one certain thing. It's nice, because we like the really heavy stuff, melodic stuff and everything in between that we can kind of just blend all together in our own thing. It works for us. It's good to have a very open, creative palette where nothing's really off limits. That's why, probably, no one in the band's ever really ventured off and done a side project, because basically, we can creatively do almost anything that we want to do within TRIVIUM. It's nice to have that creative freedom to do whatever pops in your head and go with it. Everyone in the band writes, so you get a lot of different variety and ideas and riffs. We all have slightly different styles, but it all meshes really well to make what our sound is."

TRIVIUM's eighth album, "The Sin And The Sentence", was released in 2017. The group is expected to release a new record in 2020.