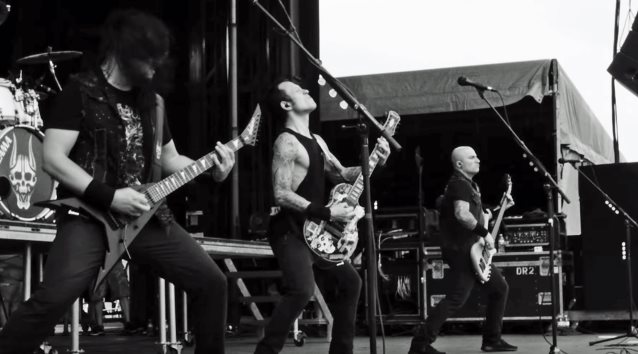 "Dead And Gone", the new performance video from Florida metallers TRIVIUM, can be seen below. The song is taken from the band's "Silence In The Snow" album, which was released on October 2, 2015 via Roadrunner. The follow-up to 2013's "Vengeance Falls" was produced by Michael "Elvis" Baskette (SLASH, ALTER BRIDGE, THE AMITY AFFLICTION) and was mixed by Josh Wilbur (GOJIRA, LAMB OF GOD).

Prior to the new disc's release, TRIVIUM guitarist Corey Beauileu stated about "Dead And Gone": "The song has kind of a modern feel with the riffs, and the verses break down to a very simple drum and bass, and the vocals take center stage. And the riffs are open, but I think that riff that is the main riff of the song has always been a riff that has really grabbed people's attention when they hear it: 'Oh, that's a memorable song.' So I think it's gonna be one of those fan-favorite tracks."