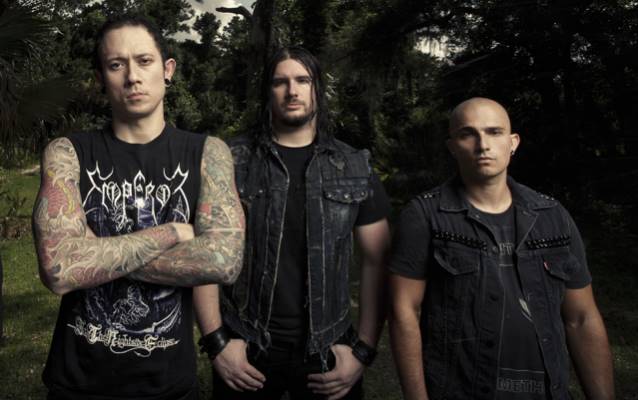 TRIVIUM members Matt Heafy, Corey Beaulieu and Paolo Gregoletto hung out with Premier Guitar before the band's show at Marathon Music Works in Nashville on April 28. In the 17-minute clip below, these metal-headed Floridians, each brandishing his own signature axe, show that you don't need an amp to rawk.

Regarding how the album was received, Paolo told the 99.7 The Blitz radio station: "It seems like it's picking up momentum as it's come out. Since we've come back in the States, we started [touring] with VOLBEAT, like, six or seven weeks ago, it's just been, like, a constant momentum, leading up to [Rock On The Range], and now going into [the Rockstar Energy Drink] Mayhem [festival], we're really just excited that we're reaching so many new people and this is their first experience of us."

TRIVIUM last month parted ways with drummer Nick Augusto due to personal differences. Stepping in for him on TRIVIUM's recent dates was the band's drum tech, Mat Madiro.