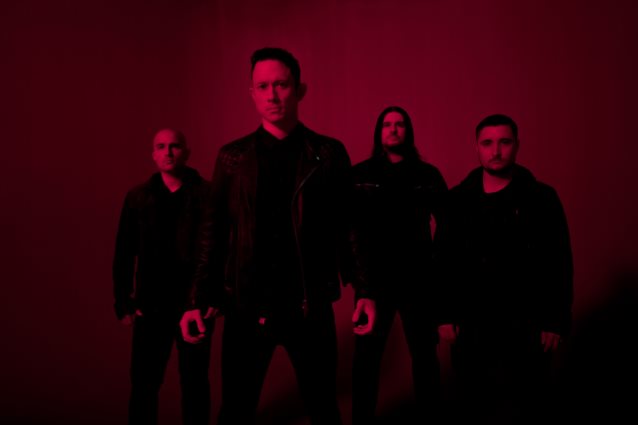 TRIVIUM To Release 'The Sin And The Sentence' Album In October; Listen To New Single 'The Heart From Your Hate'

Florida-based metallers TRIVIUM will release their new album, "The Sin And The Sentence", on October 20 via Roadrunner. The disc is available for pre-order today at all DSPs, with all pre-orders receiving instant grat downloads of the album's title track and the newly released single, "The Heart From Your Hate", which is streaming now accompanied by an official music video on TRIVIUM's YouTube Channel.

Recorded with producer Josh Wilbur (LAMB OF GOD, GOJIRA) at Santa Ana, California's Hybrid Studios, "The Sin And The Sentence" finds TRIVIUM — Matt Heafy (lead vocals, lead guitar),Corey Beaulieu (guitar, vocals),Paolo Gregoletto (bass) and Alex Bent (drums) — returning with their first new music since their celebrated 2015 LP "Silence In The Snow". The new LP also features the band's first recordings with new drummer Bent who joined the band last year. Earlier this summer TRIVIUM debuted the album's incendiary title track, "The Sin And The Sentence", the official music video for which has amassed over one and a half million views in just three weeks.

Currently wrapping up a summer of European headline dates and appearances at festivals such as Germany's Wacken Open Air and Poland's Woodstock Festival, TRIVIUM will make their return to North America this fall on a co-headline tour with ARCH ENEMY featuring support from WHILE SHE SLEEPS and FIT FOR AN AUTOPSY. The tour will kick off on October 27 in Orlando, Florida and make its way across the U.S. and Canada before finishing on December 6 in Houston, Texas. Tickets for all dates are on sale now.

"The Sin And The Sentence" track listing: