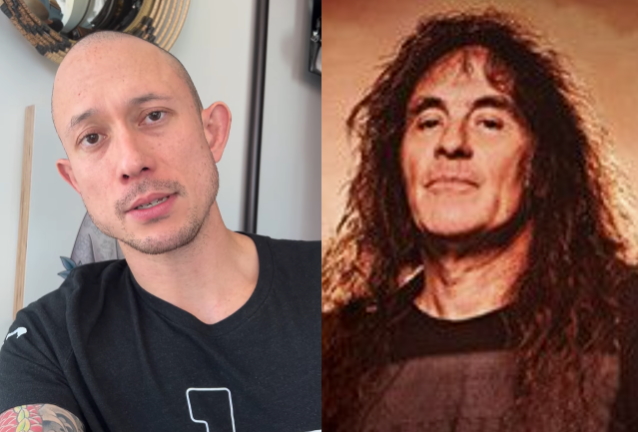 In a new interview with Meltdown of Detroit's WRIF radio station, TRIVIUM frontman Matt Heafy spoke about how he and his bandmates prepare for the shows on their current U.S. headlining tour. He said (as transcribed by BLABBERMOUTH.NET): "We definitely put the time in. I think we prep more than any band that I've heard of. I've got an hour-plus warm-up that's very specific for my vocals, and we do like a 30-to-45-minute band jam as well with this mini set-up. We've got like a V kit [electronic drums] and tiny amps; we learned that from MEGADETH and METALLICA. And we also do a long soundcheck just to make sure we're really dialed in. So when people come out, they really get their money's worth.

"It's funny. We did the MAIDEN run [as the support act on the summer/fall 2022 U.S. tour] and [MAIDEN bassist] Steve Harris came in at the end to thank us for being on the bill," he continued. "We've toured with them before a lot. He looks around and he's, like, 'You guys play a lot, huh?' I was, like, 'Yeah, we just love to make sure we're nice and warm.' And he was, like, 'The only other band I've seen do that is METALLICA.' So the fact that Steve Harris compared us to METALLICA in a small way, it's another one of those amazing, amazing little instances. I'll never forget that."

TRIVIUM opened for METALLICA at the heavy metal giants' "intimate" concert last November at Hard Rock Live at Seminole Hard Rock Hotel & Casino in Hollywood, Florida. Speaking to El Cuartel Del Metal about how the Orlando metallers landed the opening slot at the METALLICA gig, Heafy said: "It was Sunday afternoon [four days before the show]. I think we were just about to watch a movie with the kids. And I got an e-mail from our manager. He's, like, 'METALLICA asked if you can be available for this Thursday.' We were, like, 'Yes. Yes, we can. Let's do everything we can.' But we had to keep it quiet 'cause it wasn't fully confirmed yet. It didn't get confirmed until, I think, 30 minutes before we started driving down to South Florida. So we had to get our crew back down to Florida, get our gear back together, rehearse again. Luckily, we all rehearse so much individually, it's not like we're ever sloppy; it's not like we take time off. So we were ready to go. And we made it happen. We got down there. We weren't able to say 'hey' [to the guys METALLICA], but METALLICA left us an amazing handwritten letter and gave us a box of [METALLICA's] Blackened [whiskey]."

He continued: "To be able to see them at a quote[-unquote] small show; I mean, a small show for them is seven thousand people. That's more people than we can do on a big show. So, to be able to watch them that close — I was able to be on the floor and watch them — it was incredible. They're all amazing, but [James] Hetfield's [METALLICA frontman] voice sounds better than ever. I don't know how the hell that happened, but he sounds like a better singer now than he's ever been. And it's just so amazing. The vibe was great."

Asked if TRIVIUM has ever gotten feedback from any members of METALLICA about their music, Heafy told El Cuartel Del Metal: "Way back in 2006, we did festivals with them. I remember we'd never met them before. Lars [Ulrich, METALLICA drummer] pops his head in the dressing room. We were, like, 'Holy crap.' He starts talking to us. He said how they really liked the 'Master Of Puppets' cover we did for Kerrang! [magazine]. They obviously liked the band 'cause they brought us out. I remember they brought us, AVENGED [SEVENFOLD] and BULLET [FOR MY VALENTINE] out for a couple of off dates and they kind of looked at the three of us as the next generation of metal bands, which was really cool. They've always been complimentary. I've been able to hang out with Kirk [Hammett, METALLICA guitarist] a couple of times. Kirk took us out to an incredible sushi dinner on that tour. Kirk has taken us out to an incredible Chinese place in San Francisco years and years and years later. We've always kept good casual contact with them, and they're the kings. They've always been nothing but truly wonderful, welcoming, amazing people."

Back in April 2021, TRIVIUM bassist Paolo Gregoletto reflected on what it was like to meet his heroes in METALLICA. Recalling the night in 2006 when he and his bandmates ended up having dinner with Kirk Hammett in Amsterdam, he told Epic Footnote Productions' "There Goes My Hero" podcast: "It was at the hotel they were staying at. It was in Amsterdam. It was at a really fancy place, and they had a fancy sushi restaurant. Kirk really loved [TRIVIUM's] 'Ascendancy' [album], and he just wanted to come out and hang out with us. So we went to dinner at that place in the hotel and pretty much just ordered everything on the menu — like, every single thing… I don't know how long we were there, but it was quite awhile. It was crazy. And then at the end, he kind of jokingly handed me the bill, like, 'Here you go.'