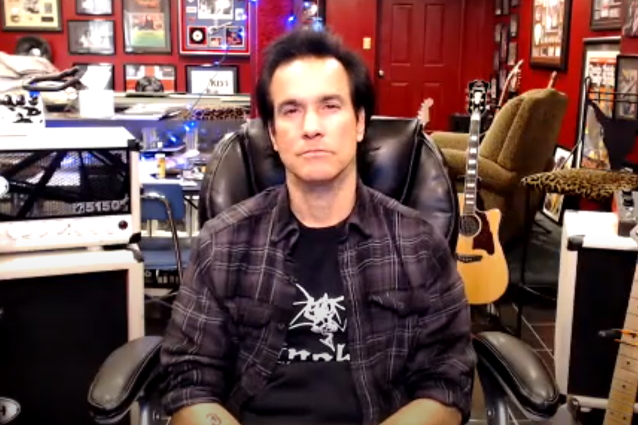 TRIXTER's STEVE BROWN: The Most Important Thing That EDDIE VAN HALEN Taught Me

TRIXTER guitarist Steve Brown recently spoke to The Rock Shop With Ralph about his nearly 30-year friendship with Eddie Van Halen. He said (as transcribed by BLABBERMOUTH.NET): "When I bought my house and was moving in and building my studio, I went out to see VAN HALEN and my wife and I were in Ed's dressing room and I had that great picture [taken] with me and him. It was the week after I bought my house and I [was] building the studio. And I told him, I said, 'Yeah, man, I'm building my studio.' And he goes, 'What are you, building something to make demos?' And I go, 'No, man. I'm building a studio, like you.' I said, 'You've got 5150. My studio's gonna be 6160.' And started cracking up. And he was so happy. We [had] many conversations about our studios and making records.

"The most important thing that Ed taught me was always keep writing, keep making music," he continued. "And he would always be, 'I don't fucking give a shit about the old days. I'm making new music.' And that was one of the things. And one of the greatest things Ed — and Alex [Van Halen] — always taught me was… Ed would always say, 'Steve, we're musicians. We make music, motherfucker. That's what we do. No matter what.' He didn't give a shit. He never gave a shit if it sold ten million records or it sold two million. We make music for ourselves first. And if the people like it… And that was one of the biggest lessons I learned from him. And, of course, the biggest inspiration in building my studio was that he built his own studio. And to be able to have a place where you have control and you can make music whenever you want, 24-7. And that's what I do here. And that's one of the greatest inspirations and gifts that my friendship with Ed Van Halen, that he taught me that. And he wanted me to build my own studio and encouraged me. And that's always the joke — that he had 5150 and I have 6160."

Brown previously discussed his friendship with Eddie Van Halen in an interview with "Sound Matters" conducted a few days after the iconic guitarist's passing. At the time, he said: "[Eddie] was the best. And just to clarify, I was friends with him. It was much different than a lot these guys that you see who maybe met him once or twice. I see a lot of these guys online. I had almost a 30-year relationship with him. And the coolest thing I can only say is that he always said, 'Steve, you're family. You're family.' He would call my house while he was on tour, whether it was on the 'Balance' tour or the '98 tour or 2004, when he was even really in a bad place. But all I can tell you is this: he loved my wife, he loved my friends. P.J. [Farley] from TRIXTER, we hung out with him. Some of the other guys in my band got to meet him and spend time with him. He treated everybody like a normal person, because that's all Ed was, and that's all he ever wanted to be.

"The first time I ever met him, he didn't introduce himself as 'Eddie' or 'Edward.' He goes, 'Hey, man. I'm Ed.' And that's really the most important thing.

"Listen, we can talk all about the music, the gear, his innovations, how he inspired the world to play guitar. But what I can say is I know the guy, and I loved the guy, and he loved me, and he loved his friends, and people that were part of the family, like I told you," he continued. "And that's the greatest thing, because he was that guy. That smile was as real as it gets. He wasn't an act. He was never an act. He got the most joy when he was up on stage playing, and that smile was two hundred percent real. And that is the truth.

"All I can say, above and beyond that, is he was sweet. He was gracious. I had these incredible times when he would call me on the road and he would leave messages on my answering machine. He didn't call my house once or twice — he called my house probably ten or fifteen times. Luckily, now, I did miss the call a bunch of times, and I was able to save those answering machine messages, which someday I might play for some people, but they are cherished memories now. But some of the times when I would be sleeping, or just getting in from a gig, and hear my phone ring at two o'clock in the morning, because Ed didn't work on the same schedule, and when Ed wanted to talk to somebody, he'd call you, whether it was five o'clock in the morning. And I'd see the phone, and I'd see the phone number, and it would say 'Ed Van Halen'. And I'd be, like, 'Well, I've gotta talk to Ed now.' And I'd talk to him. My wife and I would sit there or we'd be laying in bed, 'Oh, Ed's calling. Let's talk to him.'

"The proudest moment of his life was when he became a dad," Steve added. "I was there with him before Wolfgang was born — it was right when I met him. And then afterwards, a year and a half later, I'm at his Malibu beachhouse playing volleyball with [his then-wife] Valerie and a couple of other guys. Wolfgang's walking around in his diapers. And those are the times that I cherish the most — just being a regular with Eddie, and not having to see any bullshit from other bandmembers or deal with managers or tour managers, everybody trying to keep you away.

"One of the other cool things was anytime I would go to a show, Ed would be, like, 'You never have to knock on the dressing room door. You come in.' I would walk in the dressing room, and Ed would be half naked, getting changed to go on stage. I'm, like, 'You want me to leave?' And he'd be, like, 'No, man. Sit down. C'mon. You're family.' And Alex [Van Halen], the same way, man. He treated me like a brother.

"The only regrets I have were that I never took more pictures. But back, especially in the early '90s, that wasn't the thing that we did. But I've got enough memories to last me a lifetime."