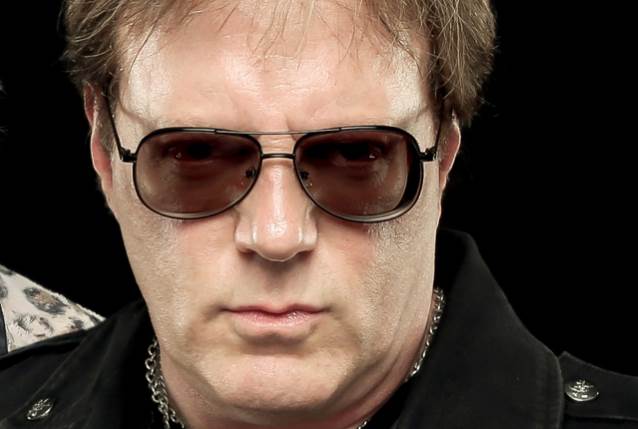 TWISTED SISTER guitarist Jay Jay French had his prostate removed two months ago after being diagnosed with prostate cancer a few weeks earlier.

The 65-year-old rocker, whose band completed its final tour in late 2016, revealed his health battle during a brand new interview on the "Let There Be Talk" podcast with rock and roll comedian Dean Delray.

French said (hear audio below): "I'm a prostate cancer survivor. I was diagnosed in March, I had an operation in April, and they tell me I'm cured. They've been watching me for 15 years, 'cause my father died of it. My father died in '84. And then starting in 2004, they started watching me carefully, and my brother carefully, and we knew this wasn't a matter of 'if,' it was a matter of 'when.' So when it finally diagnosed itself, it finally came up, I had to deal with it — I had to proactively deal with it. So seven weeks ago yesterday, I went in the hospital and had it removed. They took it out, and it looks like they got all of it.

"When I had my heart operations ten years ago, the first one failed and almost killed me, and the second one cured me," he continued. "And I faced mortality then. So I face mortality now. 'Cause we didn't know how it was gonna look until they removed it and took a look at it to see if it was gone or not gone.

"You know why they tell people who have cancer you're not cured for five years? Because microscopically, something can be in your blood stream or in your glands, microscopically, that they may not have seen and they need to follow it up for years to make sure. According to their analysis, apparently it never escaped, it never went anywhere — they got it."

Jay Jay said that he opted to have the prostate removed rather than have radiotherapy.

"I did a ton of research — a ton," he explained. "I analyzed every version of a solution to the problem and got the best doctor and made the best choice for me. And since it's a high-percentage disease — so many men get it — this is not gonna be an unusual situation. I can tell you that I have about ten guys who have had it who got me through it by explaining to me what they went through. And I intend, when I write my next article [for Inc. magazine, where Jay Jay has a regular column], to impart the same amount of information.

"To sound like an old cliché, if I can help one guy… If one person hears me and says, 'Wow! Jay Jay did it. He confronted it and he came out okay. I need to do that too,'" he said. "Don't put your head in the sand about it. Be proactive. 'Cause you don't want it to kill you."

On average, approximately one in seven men will be diagnosed with prostate cancer during his lifetime. French's advice to all men is to "get checked, first of all. Absolutely, always get checked," he said. "PSA [blood test] isn't always an indicator, but it can be. So if your PSA is above 4 [nanograms per milliliter of blood], you should really look into… That's a blood test. Then there's MRIs and then there's biopsies and then there's an operation. Biopsies are not fun. It's like being raped by Edward Scissorhands; they're not fun, but I've had six of 'em. It's not a happy thing — unless you're knocked out, which I wasn't for the first five biopsies.

"Let's just say that you have to be proactive, and if your responsibility is to your family, if you wanna live first, then you figure it all out later," he continued. "So don't talk to me about, 'Oh, man, does sex suck [after having the prostate removed]? Does this suck? Does that suck?' You know what? It may or may not suck, but you need to live first, and then you figure it out. And I have to tell you — when I talked to my friends [who went through the same thing] about it, I said to all of them, 'What was your response when they told you you had to make this decision? And when you made this decision, how did you view the decision?' And they all said the same thing to me. This is the guys who decided to have it removed versus radiation, 'cause radiation is another option. But radiation, your prostate stays in you, so you have to hope that they get it, because if they don't, they can't remove a prostate that's already been affected with radiation because it changes the shape of the prostate and the texture of the prostate and the prostate can't be removed, so you're really eliminating your options. However, to be fair, plenty of people do survive with radiation, so let me be fair about that. I completed to have it removed. And the two things that were said to me by all the guys — none of them knew each other, but just when I said, 'Why did you choose it?' they all said, ''Cause I wanted it the fuck out of my body.' Number one. And number two, when I said, 'What about the sexual incontinence?' they said, 'Dude, I'm gonna live first. I'll figure out the rest later.' I didn't understand it. But now I completely understand it."

French went on to say that since he is covered by both the Medicare federal health insurance program and the SAG-AFTRA Health Plan, the operation "didn't cost" him, "really, anything at all." However, for an uninsured man with prostate cancer, the price of surgery could range from $10,000 to $135,000, depending on the hospital.

In 2016, actor Ben Stiller divulged that he was diagnosed with prostate cancer after receiving a "baseline" PSA test at age 46, crediting the test with saving his life.

TWISTED SISTER retired from the road less than two years ago after completing a farewell 40th-anniversary tour. The band's last-ever concert took place in November 2016 — 20 months after the passing of TWISTED's longtime drummer A.J. Pero.

TWISTED SISTER frontman Dee Snider recently said that he had no regrets about putting the group to rest, explaining that he wanted to "step away gracefully" before it was too late.