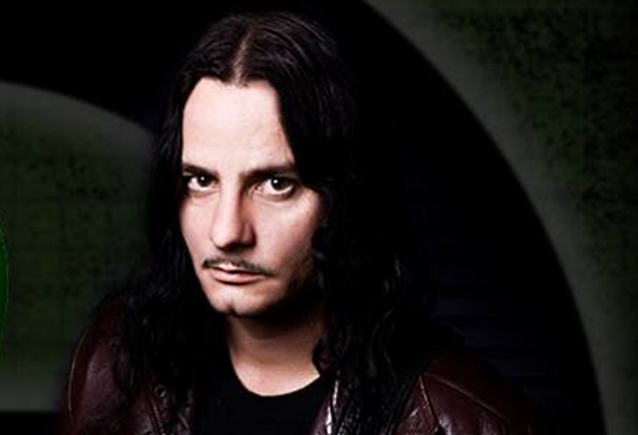 In a new interview with the "Behind The Vinyl" podcast, former TYPE O NEGATIVE guitarist Kenny Hickey remembered TYPE O's late frontman frontman Peter Steele who passed away in April 2010 from heart failure at the age of 48.

"For a long time, I was the one most likely to die, and then it switched over to him," Kenny said (as transcribed by BLABBERMOUTH.NET). "So we were always waiting for somebody to die. After a while, it starts feeding into this mythology of 'Maybe he's indestructible.' That's what gave birth to the cover of [TYPE O NEGATIVE's final album] 'Dead Again', of [the now-infamous Russian self-declared healer and holy man, Grigori] Rasputin. I used to call him 'Rasputin.' Because he'd get drunk and you [couldn't] kill him. He had a foot-long penis and he was dancing on the table. That was Peter. So I just called him Rasputin. That's how it ended up becoming the cover. And then that starts feeding into this mythology, and then suddenly, reality check, then you realize we're all mortal and everyone can die, and everyone will. So it's a shock."

Asked if he was sober at that time as well, the now-56-year-old musician said: "No. I just got sober. I have two years and nine months now. I was more… I can't say I was more controlled. I was off the rocker a lot, but there was times when I had to be more controlled 'cause I had kids and a wife. Peter didn't. So I would come back home and I'd on like a beer-only diet, something like that. And when I was away, I'd lose my mind. I'm lucky to be here too. And I'm grateful — grateful to be here. And I love being sober. I should have [done] this 20 years ago. [Laughs]

"I think you get used to being a certain way," Hickey added. "You build a reward system in your life, whatever it is — sex, food, whatever, beautiful women, rock and roll. For most of my life, since I was 12, one of my main reward systems was booze. So to change that is a very, very, very hard thing. It's a very big thing. Look at me. It took me 54 years. [Laughs] But you can — you can switch your reward system to other things."

Earlier this month, former TYPE O NEGATIVE drummer Johnny Kelly was asked by Germany's Sonic Seducer magazine if there has ever been any talk of staging a tour in honor of Steele. He responded: "I don't know if I would ever wanna do something like take it on the road or… It could never be a reunion; Peter's not there, so it's impossible to call it a reunion.

"I think that Peter's work deserves some kind of celebration," he continued. "And how that can happen, I really have no idea. But we've never seriously considered doing any kind of reunion or putting something out there as TYPE O NEGATIVE without Peter. Peter, his musicianship, his character — without him there, you can't call it TYPE O NEGATIVE."

This past February, Kelly confirmed to the "Loaded Radio" podcast that there has been "coffee talk" about a possible Peter Steele tribute concert. But, he clarified, "There was never any serious consideration, like, should we do something? Is there even a point of doing it? Or also, is it just a blatant cash grab? So all these things go through your head.

Born Petrus T. Ratajczyk on January 4, 1962 in Brooklyn, New York, Steele stood 6' 7" (201 cm) tall, and had a low, bass-heavy voice, which was one of the most recognizable features in TYPE O NEGATIVE's music.