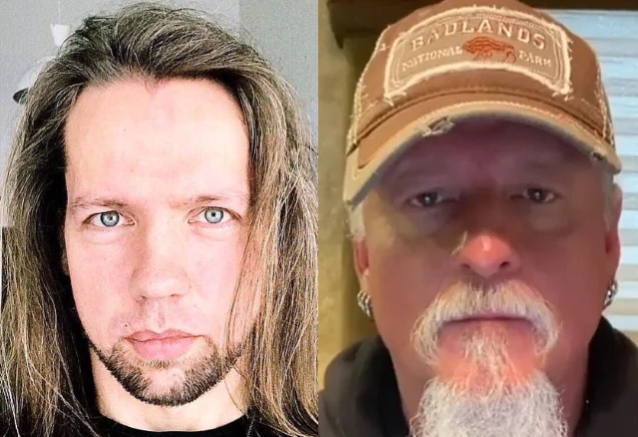 TÝR Frontman Questions JON SCHAFFER's Guilty Plea: It 'Sounds Like He Doesn't Really Believe In What He Was Trying To Do'

Three members of the Faroese folk metal band TÝR recorded a new episode of their video podcast "Týrcast" during which they discussed ICED EARTH guitarist Jon Schaffer's recent guilty plea for his role in the January 6 riot at the U.S. Capitol. As part of the plea deal, Jon has entered into a cooperation agreement with the government.

Noting that TÝR completed a summer 2019 North American tour as the support act for DEMONS & WIZARDS, Schaffer's collaborative project with BLIND GUARDIAN frontman Hansi Kürsch, TÝR frontman Heri Joensen said (as transcribed by BLABBERMOUTH.NET): "[DEMONS & WIZARDS] treated us very well. They were nice to us. I didn't talk to them terribly much. I talked most to Hansi and maybe their manager also. But I talked to Jon Schaffer about — I don't know — three times maybe, [for] anywhere from five minutes to half an hour. And he seemed nice enough, honestly. Very American. But apparently he was part of a group called the Oath Keepers" — a large but loosely organized collection of individuals, some of whom are associated with militias — "which seems pretty far out to me, when I read about it — some conspiracy theory group that wants to overthrow the American government. And that is no small business."

Joensen continued: "I wanted to let it go and not talk about it and not get into politics on this podcast too much, but this was very interesting, especially when Dee Snider, a couple of days ago, tweeted about this. First, there were pictures and videos of the insurrection where Jon Schaffer is clearly visible, so he was wanted by the FBI after this event, and he turned himself in. And he was given some charges, [and] he could face decades in prison for it. But apparently he made a deal with prosecutors so that for cooperation and obviously turning other people in, he will get a more lenient sentence. Dee Snider, the singer of TWISTED SISTER, did not react kindly to that. He called him 'a piece of shit, embarrassment to the metal community,' he said. 'If you do the crime, then do the time.'"

Added TÝR drummer Tadeusz Rieckmann: "I have to agree with Dee Snider here. I mean, seriously, if you're really stupid enough to break into the building of the American government and try a revolution, and after that, you're not even facing or standing up to what you were convinced of doing is right or is true or is your purpose, then, I mean, come on — that's call snitching."

Continued Joensen: "Sounds like he doesn't really believe in what he was trying to do. If he thinks the entire government needs to be overthrown, he wouldn't try and make a deal with them to turn other people in as well. It seems very half-baked and half-hearted to me. Decades in a U.S. prison is no holiday; it's no picnic. Especially at our age, your entire future is gone.

"But anyway, it's a pretty serious crime and attempt to overthrow the entire government. And how you can then try and cooperate with them for leniency from the very system you were trying to overthrow."

TÝR bassist Gunnar H. Thomsen weighed in: "It all seems so harsh. It kind of brings me back to some of the troubles we've been through. Instead of going a political way of showing people your point of view, what you think is right, they come and do stuff like this, which is somewhat childish in a way."

Tadeusz said: "It's actually radical. And that is the biggest problem here, I think."

Heri concurred, saying: "But there's also something childish about it. It's like when you're losing a game of chess and you just wipe everything off the table. We have a functioning system here. You may not like it, but there are ways of interacting with it if that's what you want to. There are also ways you absolutely shouldn't. If whatever they were trying to do was successful, there's, I think, a one hundred percent chance that things would be worse and not better.

"The American system probably isn't perfect — I don't think any system is — but treating it like this is almost certainly gonna make it worse, if they were successful."

Schaffer's attorney, Marc Victor, asked the judge for his client to be released with no travel restrictions, saying that while he lives in Indiana, he has family he cares for in Florida and his legal team is in Arizona. He also noted that Schaffer is an "internationally known musician and recording artist."

"He is the first person to plead guilty in this historic investigation to take responsibility for his role in the Capitol riot," Victor said. "He contacted authorities as soon as he discovered he was a person of interest, and he self surrendered."

At a November 2020 Donald Trump rally in Washington, D.C., Schaffer was videotaped walking behind a Florida couple, Kelly Meggs and Connie Meggs, who are accused of being among 10 members of the Oath Keepers to have played a leading role in the Capitol assault. According to federal authorities, Kelly and Connie Meggs plotted for weeks ahead of the attack, attended training sessions and recruited others. Kelly Meggs is the 52-year-old head of the Oath Keepers' chapter in Florida.