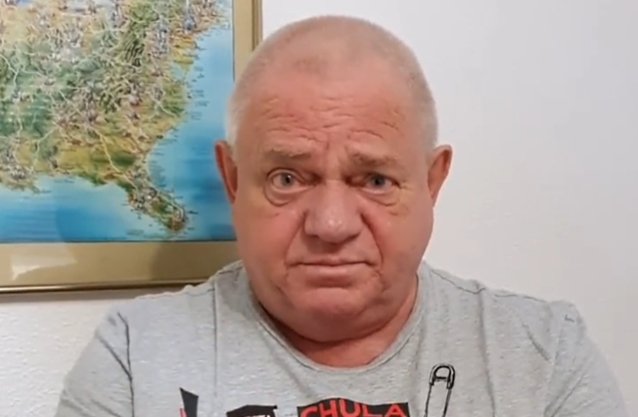 Udo Dirkschneider has once again expressed regret over not securing rights to the ACCEPT name, the band he co-founded in 1976. The German frontman has been vocal over his dissatisfaction with the current Mark Tornillo-fronted version of ACCEPT that features only one original member — guitarist Wolf Hoffmann. Despite announcing plans six years ago to stop performing ACCEPT material live, Dirkschneider continues to do so in both U.D.O. and DIRKSCHNEIDER.

In a recent interview with BLABBERMOUTH.NET, Udo talked about the business decisions that have forced him to carve out a legacy in U.D.O. and DIRKSCHNEIDER, which have also created fervent debate over whom should be performing ACCEPT's back catalog. "[ACCEPT's longtime manager] Gaby Hoffmann was clever to have us sign paperwork that all the rights should go to Wolf for the name in 1981," he said. "At this time, we were signing a lot of papers. I found out very late that I signed something like that. It's history. I'm fine with U.D.O., I'm fine with DIRKSCHNEIDER. I can still play ACCEPT songs. It doesn't matter if it's called ACCEPT or U.D.O. — people know what's going on. For me, it's history. It's not the nicest thing in the world, but it was a long time ago, but so what?"

Udo then delved into how he considers the two outfits that bear his names to be actual "bands" instead of him performing with a bunch of backing musicians. "I'm an open-minded person," he said. "For me, I never saw me in U.D.O. or DIRKSCHNEIDER as a solo artist. For me, it was important to have a band around me. It's not like I have to stand in front of everyone onstage. It's important that the band is one. I also said that to my band members: 'You also stand in the front if you have your part.' I think that's a good thing for the audience and fans to realize. It's not like just Udo. It's also the band."

In early 2019, Udo developed left knee issues that left him partly immobilized onstage. Now 70 years of age and promoting his "My Way" covers album, Udo talked about the health and fitness regimen that has helped him regain his previous form.

"I'm fine," he said. "No problems at all — I'm in good shape. I do a lot of walking around, swimming in the ocean. Walking has been good enough for me. Because of the pandemic, we only had four shows in the last two years. We are touring more with the intent of doing more than four shows. Now, it looks like we can move on again with touring. We'll start rehearsing in ten days for our tour in South America. Then we have the festivals over the summer, then a European tour.

"It's very important [to stay busy]," he continued. "If you're 70 years old, you're getting really old. But the whole business and what I'm doing keeps you young. [Laughs] For me, 70 is just a number. I don't feel like I'm 70. We will see how long I can do this. Hopefully, for a long time. People are asking me, 'When are you retiring?' I say, 'Retirement? What is this?' Sit at home, drinking coffee and watching the weather? That's not for me. I hope I can do this for a long time, but we will see."

Released on April 22 via Atomic Fire Records, "My Way" is billed as Udo's "most personal and extraordinary album to date." The effort contains 17 cover versions of the songs that have influenced the musician and singer the most, including classic tracks from URIAH HEEP, RAINBOW, THE SWEET, MOTÖRHEAD, LED ZEPPELIN, SCORPIONS, AC/DC and JUDAS PRIEST.