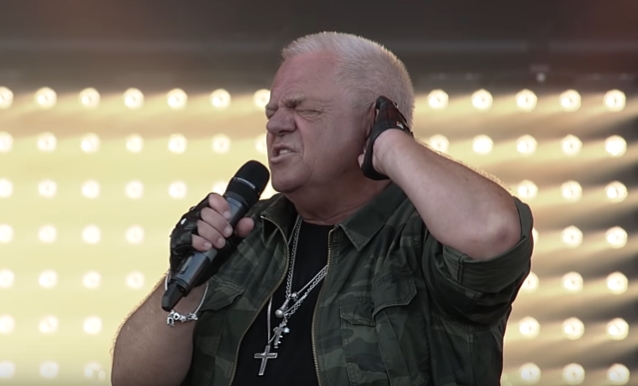 UDO DIRKSCHNEIDER Says He Never Warms Up Before Live Shows: 'I Go On Stage And Start Singing'

In a new interview with Wacken Radio, former ACCEPT and current U.D.O. singer Udo Dirkschneider was asked how he keeps his voice in shape after all these years. He responded (hear audio below): "It's very interesting. Some stuff, when I'm singing now, it would be not possible to sing this 15 years or 20 years ago. Especially the lower range is getting much better. And also what Stefan Kaufmann [U.D.O. producer and former ACCEPT drummer] said to me when we did this 'We Are One' album [last year] — he was doing all the recordings — and he said, 'This is crazy.' He said, 'You hit notes that you did on [ACCEPT's] 'Breaker' [1981] record. It's impossible.' I said, 'I don't know. Don't ask me.'"

He continued: "It's a miracle. [Stefan] said to me, 'This is really a miracle.' He said, 'This is unbelievable.' I said, 'Yeah.' Also, I don't have any problems live. We always are doing long shows — like, for two hours. I don't have any problems. I never warm up. I go on stage and start singing — that's it. I don't know. I'm really lucky, I think. I know a lot of singers, they have really problems. They can [play] maybe two shows, three shows; then they have to make a day off, or two days off. They are having problems to sing some stuff.

Earlier in the month, Dirkschneider confirmed to Hardrock Haven that U.D.O.'s new album will be released "after the summer."

Last year, U.D.O. collaborated with Das Musikkorps der Bundeswehr, the military band of the German federal armed forces, on the aforementioned album called "We Are One", which was released in July via AFM Records/Soulfood Music.

U.D.O.'s latest collection of new songs, "Steelfactory", was released in August 2018 via AFM.