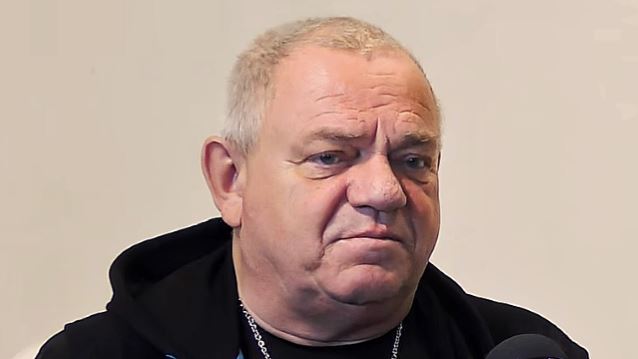 Mike of Metal Temple and Ian of ARFM, conducted an interview with former ACCEPT and current U.D.O. frontman Udo Dirkschneider on April 13 at the Manchester Academy in Manchester, England. You can now listen to the chat in the YouTube clip below.

Speaking about the current state of the rock scene, Udo said: "Of course, I listen to younger bands, and there are a lot of good bands around. But what I'm missing is there is no personality on stage anymore — like Bruce Dickinson, like Lemmy, like [Ronnie James] Dio or whatever. They're really good bands — music-wise, they're doing really good stuff — but I think they play for themselves and not for the people. And I think what we're doing, in a way, is we entertain people, you know. Of course, if I wanna play for myself, then I can go to the rehearsal room, but not play in front of people. This is, I think, what I was learning with ACCEPT, especially in America — you have to entertain people and give the people what they want, of course."

He continued: "Some people were also asking me, 'Why do you still play [the ACCEPT song] 'Balls To The Wall'? I said, 'Yes, you can wake me up in the morning at three o'clock and I can play this song.' But if you're on stage and you see — also with U.D.O. — fifteen- and sixteen-year-old kids singing the whole song, that means you did something. You see the reaction and then you don't start thinking, '[I have to sing this song again.] It's again getting boring.' No; it's really, like, 'Yes!' But if you create something like this. Like, for example, DEEP PURPLE [is expected] to [always] play 'Smoke On The Water' and 'Highway Star' or whatever. And maybe also they are [like] 'Okay,' but the people wanna hear it. I give the people what they want. Sometimes also the young bands have to learn this — to play for the people and not for themselves."

Udo in February embarked on a special DIRKSCHNEIDER tour during which he is performing ACCEPT songs one last time before he closes the chapter for good.

The April 2 DIRKSCHNEIDER concert at Kaminwerk in Memmingen, Germany was professionally filmed and recorded for a DVD and CD release.