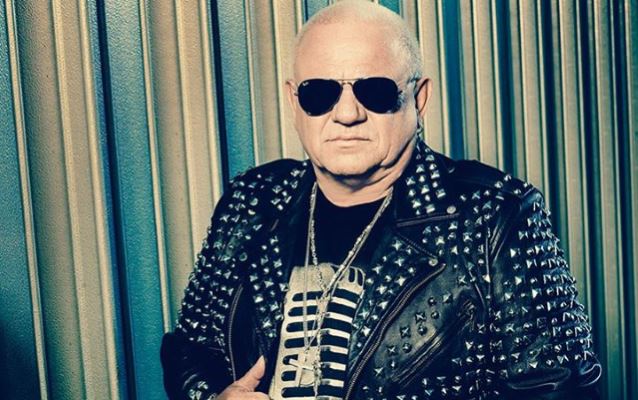 UDO DIRKSCHNEIDER To Embark On Special ACCEPT 'Farewell' Tour In 2016

Former ACCEPT and current U.D.O. singer Udo Dirkschneider will embark on a special tour next year during which he will perform ACCEPT songs one last time before he closes the chapter for good.

The 62-year-old German singer revealed his plans at a press conference in the VIP tent of this weekend's Wacken Open Air festival in Wacken, Germany.

During this ACCEPT "farewell" tour — which he will perform under the DIRKSCHNEIDER banner (not U.D.O.)— Dirkschneider will only showcase songs from the Udo era of ACCEPT. The German rock staple will close a huge chapter of music history forever. In the early '80s, the Solingen-raised singer skyrocketed to worldwide acclaim with the band ACCEPT and with his unmistakable voice, he had several hits such as "Balls To The Wall" and "Princess Of The Dawn". Now he has announced that he will perform these much-loved hits on this special tour one more time before he removes them from the setlist forever.

"I still love singing these songs live," Dirkschneider says. "The songs still are an important part of my catalog and still suit my voice very well. But at some point in your life, it's just time to close the chapter. There has been so much talk and speculation about ACCEPT, so I just want to give my last definitive musical statement about it and give my fans a chance to see me perform a complete concert of these songs one last time on stage."

After this tour, Udo will only play songs from his extensive library of U.D.O. material. Following his dismissal from ACCEPT in the late '80s, he garnered many classic hits with his new band in a long and successful career, such as "Animal House", "Timebomb" and "Man And Machine". "There is enough high-quality [U.D.O.] material to fill a two-hour set with no problem," says Dirkschneider. "U.D.O. has been the band where I belong for 18 years and I want to pay tribute to them from now on."

In a January 2015 interview with the "Lokaos Rock Show", Udo was asked how it felt for him to see ACCEPT continue with a new singer (ex-TT QUICK frontman Mark Tornillo) as his replacement. He responded: "What can I say? I mean, I [went to see] a show of ACCEPT in Hamburg [in October 2014], and I was a little bit disappointed. It was without any emotion. For me, there was no band on stage. Playing-wise, it was okay, but it was without any emotion. It was automatic — like, do it and then go."

Pressed by The Rock Online if he is bothered by the fact that ACCEPT took the pole position in Germany for the first time with an album (2014's "Blind Rage") that features Mark Tornillo on vocals, Udo responded: "Let's say it this way. I mean, I know the business, I know how everything works, you know. I mean, they were changing the release date [of the album in order to insure that it would place high on the chart]. Normally, it was planned [to be out] one month before [in July 2014], but it was the same time that JUDAS PRIEST was coming out [with 'Redeemer Of Souls']. I mean, I know the business behind [the decision to push the release date back]. You know, and then they moved it to August. August, normally nothing is happening [in terms of big releases coming out]. [It was a] really clever [move] by the record company. I mean, I know how much albums it sold to [land] on the first… to be Number One in Germany. So that's the whole thing behind the scenes. I mean, of course, it's good if they have a Number One. It's, like, yeah, the press [reacts very enthusiastically]: 'Wow...!'"

He continued: "I wanted to see it once live, you know, what they're doing on stage. And let's say it in this way: I was… I cannot really explain it. It was like something like… It was, for me, nothing… like there was no band on stage, you know. For me, it was like they were playing everything without emotion. They [didn't] look [at] each other. It was something, you know, it was like just, 'Okay, here we go... Be finished and go!' And, okay, in a way… It was sold out. But I thought the reaction of the people... Let's say, the most reaction was when they did the old songs. Of course. So, but, you know, and the singer [Mark Tornillo]… In a way, he's a good singer, but when he has to sing all the old ACCEPT stuff, I feel very sorry for him. This is a nightmare.

"I don't wanna say anything bad, you know, but it was really, like… I was, like, really, 'What are they doing there!?' I mean, I thought they really [would perform]... yeah, let's say, really with energy and really with, you know, emotion. But this was like something… Okay… There was nothing… There was not a band, for me, on stage. So, but now I saw this, and I wish them all the best."

Udo added: "For me, it was really important to… I wanted really… I had the chance [and] wanted to see [the current version of ACCEPT perform] live. And it was very important for me. And now I know what I wanna know from this band, you know, and then I say, 'Okay, I saw it with my own eyes, I hear everything.' That's it."