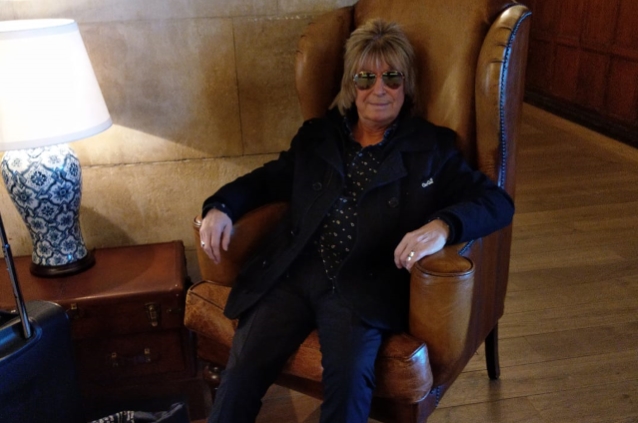 UFO guitarist/keyboard player Paul Raymond has died after suffering a heart attack. He was 73 years old.

The news of Raymond's passing was broken by his "life partner," Sandra, who wrote on Facebook: "With a desperate and broken heart, fully in tears and pains that feel like they will kill me, I have to tell you that my most beautiful and beloved darling Paul Raymond has passed away today. The doctors we're trying to reanimate him and with success at first but then his system shot down again and there was nothing more they could do for him, he died of a heart attack.

"He absolutely enjoyed the last couple of weeks touring with UFO in the UK & Ireland and he was looking forward to the rest of this year's tour.

"This photo was taken last Wednesday when we checked out of our last hotel before coming back to Germany!

"I will always love him and I hope he will rest in piece until I'll see him again on the other side!!!

"I love you so much Paul"

Paul's professional career began in January 1964. He started out as a jazz musician but went on to become best known as a member of legendary British rock band UFO's classic lineup alongside Phil Mogg, Michael Schenker, Andy Parker and Pete Way. Raymond is also featured on classic records by CHICKEN SHACK and SAVOY BROWN as well as solo albums, plus those credited to PAUL RAYMOND PROJECT.

Way posted on Facebook: "I've just heard the sad news of Paul Raymond's passing. I won't pretend that we were always the best of friends but I am completely shattered to hear this.

"My sincere condolences go out to his family, particularly Sandra.

Schenker wrote: "It is unbelievable. Paul Raymond was a great musician and loved rock and roll. My condolences to his loved ones. Rest in peace, my friend."

Hi to all the fans and people who knew Paul! This is Sandra, Paul's life partner speaking: With a desperate and broken...

Today we are too shell-shocked to write anything other than to share Sandra's post at the link...