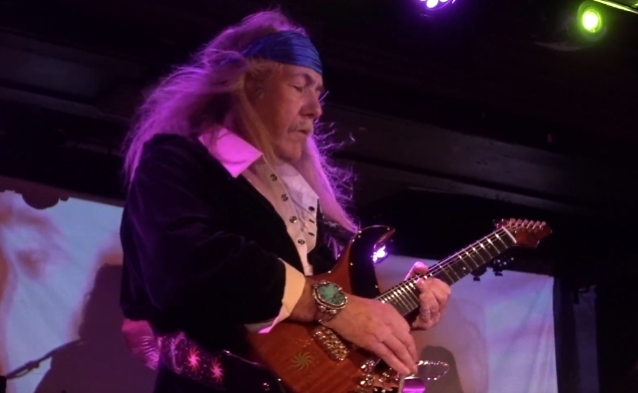 Uli Jon Roth has once again weighed in on the rift between Michael and Rudolf Schenker, saying that it leaves him "dumbfounded and pretty speechless."

Michael Schenker gave a number of interviews in the last few years in which he questioned his brother's integrity, going so far as to call Rudolf "a con artist" who "completely adopted" Michael's image as his own. He also denounced the SCORPIONS for "distorting" the story of his brief tenure with the band and criticized what he saw as ongoing efforts to minimize the contributions of the group's former drummer Herman Rarebell and ex-bassist Francis Buchholz, as well as SCORPIONS' long-running creative complacency.

In a recent interview with Jeff Gaudiosi of MisplacedStraws.com, Roth — who was in the SCORPIONS for five years before leaving the group in 1978, following the release of the live double album "Tokyo Tapes" — stated about Michael's comments: "I think this developed maybe not too long ago, and this is coming from Michael's side, because Rudolf doesn't bear any grudges and Rudolf is the coolest guy you could imagine. Virtually all of what Michael says doesn't make any sense to me regarding this. I just don't understand it. And having known Rudolf closely for five years [in the early years of SCORPIONS], it's almost as if Michael is talking about a different person. I still know Rudolf, and I still think Michael is talking about a different person. Maybe Rudolf has some alter Jekyll-and-Hyde ego that I don't know of, but I don't think it exists.

"I don't know what Michael's deal is there," Uli continued. "I can't really comment on that other than that I think it's very sad to talk about your brother like that. I wouldn't talk about anybody like that, even if it was true. I don't understand the negativity. It's not very becoming. I just don't understand it. And I don't think Rudolf deserves it. As far as I know, Rudolf always did good for Michael. That was just my personal perception."

Roth went on to say: "No offense to Michael. He's one of the greatest guitar players that the world has ever seen, and particularly one of the most unique. And I respect him for that. But this other thing is something that just leaves me dumbfounded and pretty speechless. I don't know where it's coming from, and I wish it would just go away, because it's not doing Michael any good to be seen as somebody who's talking badly about his brother.

"And also, let's not forget, yes, Michael is the much better guitar player, technically, and a more versatile musician, but Rudolf wrote some amazing hit songs which were musically on a very high level, and that's not an accident. That's a special gift. Very few people have that. That should not be underestimated in any way. Rudolf is a real artist too, and nobody should take that away from him."

Michael Schenker has repeatedly said that he was "disappointed" in his now-70-year-old brother over the way the SCORPIONS described his time with the band during the writing and recording of the 1979 album "Lovedrive". Michael also claimed that that the SCORPIONS took advantage of him and took credit for his songwriting efforts. It all came to light, Michael said, when he was approached to help with the 50th-anniversary SCORPIONS reissues.