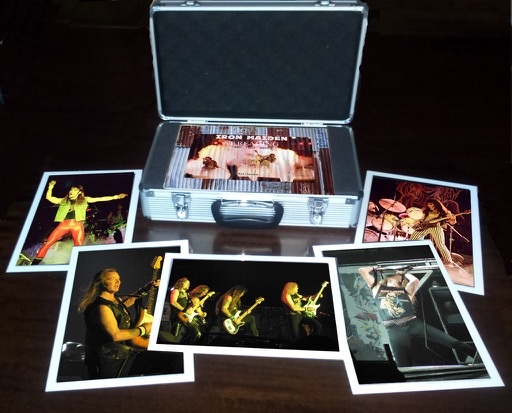 Unauthorized Book 'Iron Maiden At Reading' Due In March

IRON MAIDEN first appeared in 1980 when Paul Di'Anno was fronting the band and Dennis Stratton was on guitar. They appeared second on the bill to UFO on the second night. Undoubtedly for MAIDEN's Steve Harris, there was nothing but respect for the headliners with UFO's Pete Way being one of Harris's biggest bass guitar influences.

Also on the bill that day were two future IRON MAIDEN members — Bruce Dickinson, then the lead singer with SAMSON, and guitarist Janick Gers of WHITE SPIRIT, who were brought in as a replacement band.

By 1982 when MAIDEN returned to Reading, it was naturally as the headlining act on the Saturday evening. The band had gone through significant changes to the lineup, most notably with Bruce Dickinson now fronting them, which coincided with their rise in popularity.

Incredibly, it would be another 23 years before MAIDEN returned to Reading, by which time they were in their third decade and had become the undisputed giants of metal. Their longevity also stood out as most of the other major acts that performed over the three days had only appeared on the scene over the previous few years and none could boast a back catalogue quite like MAIDEN's.

With a large collection of photos and memorabilia from the gigs and narrative from IRON MAIDEN author Neil Daniels, this limited-edition book is a wonderful celebration of MAIDEN's unforgettable appearances at a British institution. Each book is individually numbered and comes in its own flight case with a set of high quality prints.

For more information and to pre-order the book, go to this location.