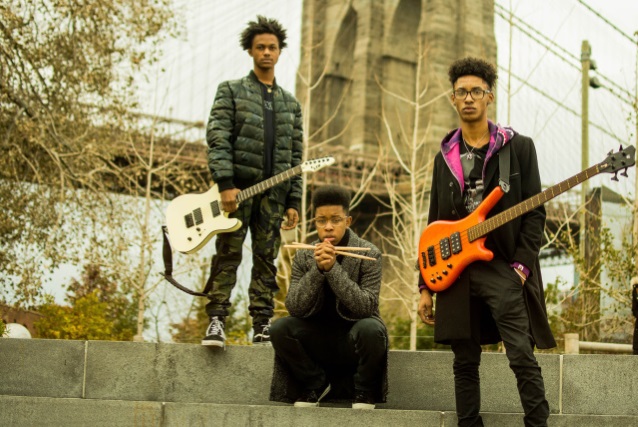 By now, the story of teenage metal trio UNLOCKING THE TRUTH (who walked away from a seven-figure deal with Sony) is well known. After years of media excitement, late-night TV appearances, and breakout sets at Coachella and Bonnaroo, the band's debut album, "Chaos", was finally released independently last year. The Brooklyn, New York-based band is now back with a new music video for their latest single, "My Chains". The clip — directed by JP Brasca — cuts through much of the hype surrounding the group and shows a different side of the band.

"We wanted the video to show that UNLOCKING THE TRUTH has more to offer than just a good song," says guitarist/vocalist Malcolm Brickhouse. "The video and song both push the envelope for 'the norm' in metal music. It's fresh. It's new. It's 'My Chains'!"

The track is a soulful metal hybrid, co-produced by Brickhouse (and Kenta Yonesaka of Germano Studios in New York),who says: "The meaning of 'My Chains' will be different for everyone, but there's a line in the song for everyone. Think about it. We all have chains in life. It could be somebody or something we use as a crutch to help us get through life and loosen those chains."

UNLOCKING THE TRUTH is Malcolm Brickhouse (vocals/guitar) Alec Atkins (bass),and Jarad Dawkins (drums). Founding members Brickhouse and Dawkins met each other at a birthday party in 2005. Sharing similar tastes in music, they decided to create a band. As the metal duo's street performances started gaining attention, Brickhouse and Dawkins felt they needed a bassist but none of their friends were musicians, so they taught their pre-school friend, Alec Atkins, how to play the bass guitar from scratch. These street performances in Times Square and around New York City led to people recording and uploading videos of them to YouTube, which garnered a lot of attention through social media. The trio have since appeared on national television, including NBC's "The Tonight Show", ABC's "The View", CNN, Fuse, BET, Comedy Central's "The Colbert Report" and more. In 2014, they were the youngest group to perform at Coachella. They've performed at the Afropunk Fest, SXSW and were the youngest band to play at the 2014 Vans Warped Tour. They have also performed at the high-profile music festivals Heavy Montreal and Bonnaroo. The trio have supported music legends such as GUNS N' ROSES, MOTÖRHEAD, QUEENS OF THE STONE AGE, LIVING COLOUR, MARILYN MANSON and more while also earning spots in commercials for Airheads, AT&T, Beats by Dr. Dre, Maybelline and Verizon. In 2014 the band signed a contract for five albums with Sony Music Entertainment, but in 2015, they successfully negotiated their release from the contract. Their full-length debut album, "Chaos", was released on June 17, 2016 via TuneCore, and a feature-length documentary film about the band, titled "Breaking A Monster", came out in 2016.