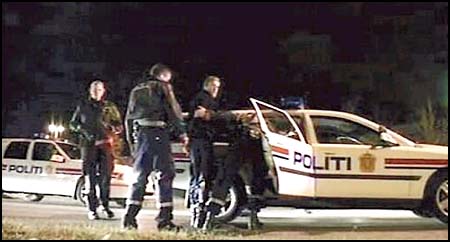 A day after he failed to return to prison as scheduled following a short leave, Varg Vikernes was captured by the Norwegian police on a highway outside the country's capital.

Vikernes was taken into custody at 12:45 a.m. Monday morning (October 27) after police in Oslo received information from police in Romerike that the fugitive was traveling in a car on the E6 road to Oslo.

"We signaled for Vikernes to stop, but when he didn't, we were forced to box his car in between two police vehicles [Photo#1, Photo#2]. There was a was dent [to the car]," officer Vider Hjulstad told NTB.

Varg Vikernes was alone and unarmed at the time of his arrest.