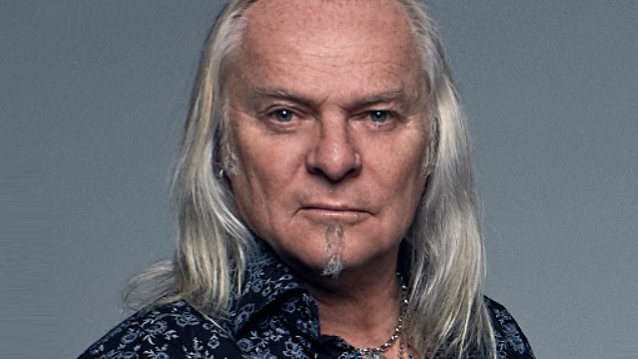 URIAH HEEP Singer Defends ROB HALFORD Over Phone-Kicking Incident: 'I Can Sure Understand The Frustration'

URIAH HEEP's Bernie Shaw has defended Rob Halford over an incident last month when the JUDAS PRIEST singer kicked a cell phone out of a fan's hand during a concert because the fan was allegedly interfering with his performance. The incident happened six songs into PRIEST's May 25 set in Rosemont, Illinois, where the group was playing as part of its North American tour with URIAH HEEP.

According to eyewitness accounts, Halford appeared frustrated that the fan had turned on the light on his camera on while filming the show, making it harder for the singer to focus on his performance. As a result, Halford decided to kick the cell phone away while the band was playing the song "Judas Rising".

After footage of the episode went viral, Halford issued a statement in which he said: "The facts are we love our fans and you can film us all you like and watch our show on your phone rather than in the flesh. However, if you physically interfere with The Metal God's performance, you now know what will happen."

Shaw addressed the incident during a recent appearance on the "Do You Know Jack?" podcast. Admitting that Halford might have taken "it a little bit too far" in the way he responded to the fan," the URIAH HEEP singer added that he "can sure understand [Rob's] frustration. 'Cause as a performer, you get into the moment, you get into the mood, and you don't come out of character until you walk offstage. And for him to get interrupted like that… His space was invaded, in my opinion. This is only truly my opinion. I don't think it was the right thing to do — maybe he overreacted — but I can sure understand where it came from."

He continued: "[The audience is] getting carried away with the adrenaline and the evening as well, but there's a fine line — there's a bit of decorum. And in my opinion, there should be a little bit more respect to the band that you supposedly like and follow."

Asked for his personal view on people filming entire concerts on their cameras and uploading them to the Internet, Shaw said: "Personally, I'm not a lover of people that steal my show. The audience pay good money to come to a concert and enjoy the evening and enjoy the event and the adrenaline and the energy. And for somebody who just thinks that they can waltz right in, get their little GoPro out and steal my show — 'cause that's an infringement of copyright… I spent hours, months, years honing my craft, as the whole band did. And we put everything into a show. It costs us thousands of dollars to put on a show with the production. It's a thousand dollars a day just for the bus, let alone the diesel that goes into it at six miles an hour, and let alone the hundred and fifty bucks a day just for the driver. You add everything — all the wages and all that — up, it's a pretty big monetary, financial — whatever you wanna say — investment. And you get people waltzing in with their cameras and their GoPros and just put it up on social media. My personal view is, I don't like it, but I have to embrace it, because at the same instance, it's a little bit of promotion. Back in the day, it used to be sold — you used to be able to buy bootlegs. You probably still can. But it's all up on YouTube now."

Shaw went on to say that the issue with fans filming concerts is "a two-edged sword" for him. I used to really, really dislike it," he said. "I used to stop the show and tell the people to get that camera."

URIAH HEEP is touring in support of its 25th studio album, "Living The Dream", which was released last September via Frontiers Music Srl. The band's ongoing North American tour with JUDAS PRIEST wraps up June 29 in Las Vegas, Nevada.