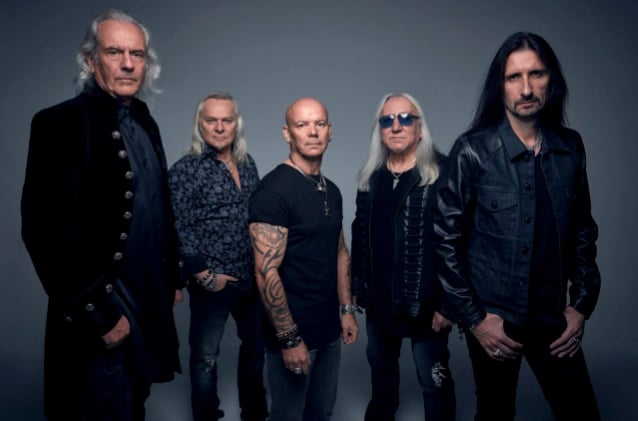 Legendary progressive rock band URIAH HEEP is set to commence the recording of its brand new studio album (the 25th in the group's storied career),which will be titled, appropriately enough, "Living The Dream".

"We have been together for 47 years and we have seen many bands come and go, so in effect we are 'Still Living The Dream,' so it was the perfect title for the new album," says URIAH HEEP guitarist and founding member Mick Box.

Jay Ruston has been called in to produce the album. Mick says: "We chose Jay because we admire his work with THE WINERY DOGS, STONE SOUR, BLACK STAR RIDERS, Paul Gilbert and EUROPE. Jay has either produced, mixed or both for these bands, and he will bring a fresh approach to HEEP, which we are very much looking forward to."

The plan is release the album through Frontiers in fall 2018 (release window subject to change). The band is beyond excited with the material written for the new album, which will include some epic additions to the band's huge catalog of rock staples and looks forward to sharing it with their fans around the world.

In the meantime, the band has announced four Canadian tour dates, with more shows in the works.

"The mighty HEEP are proudly able to tour in over 61 countries and we look forward to a packed touring schedule in 2018. Touring is in our blood and what we have a passion to do, and so 2018 is no exception," concludes Box.

A full tour in support of the new release will be announced in the coming months.

Asked in a recent interview with Gulf News how URIAH HEEP has been able to weather the lineup changes and handle the different personalities of the members over the decades, Box said: "I guess when anyone joins HEEP, there is already a firm template musically in place, so they just respect that and take that on board and fit in. Personality is very important and we all need to get on as we tour in over 60 countries, so we see a lot of each other. Right now we have a great blend of personalities and a very strong creative force, so we are all happy."

Mick also looked back on URIAH HEEP's five-decade career, saying: "It has been an amazing journey and there is no sign of it letting up. I have been blessed to be still doing what I love and the other boys all agree. We have fans all over the world who have been extremely loyal, and as each decade passes, we gain more and more young fans, which is wonderful. When a young fan shouts out please play 'Gypsy' and the song is older than him or her, then you know you have done something right. There is no better place than to be on that stage."