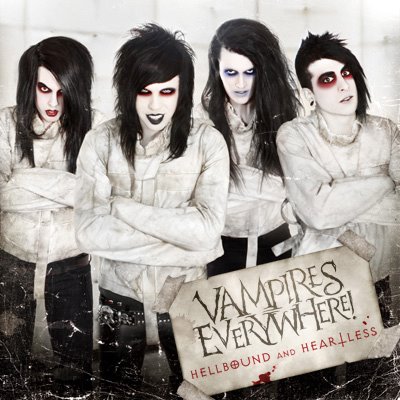 The second in a series of video clips in which vocalist Michael Vampire of Los Angeles-based goth-metallers VAMPIRES EVERYWHERE! discusses the band's forthcoming sophomore album, "Hellbound And Heartless", can be seen below.

"Hellbound And Heartless" will be released on June 19 via Hollywood Waste Records. According to a press release, the CD "showcases the darker side of VAMPIRES EVERYWHERE!, focusing on message-driven lyrics and deriving musical influence from industrial rock icons such as MARILYN MANSON and ROB ZOMBIE. "

"Hellbound And Heartless" was co-produced by the band and Mike Sarkisyan and Tommy Decker, both members of Grammy-nominated alternative-metal act SPINESHANK. Every song on the album presents a fresh, new morsel of gothic darkness for fans to sink their teeth into.

"Early on while recording this record I felt an amazing force behind it," says vocalist Michael Vampire. "'Hellbound And Heartless' is a piece of me and a lyrical representation of who I am. I dedicate this record to our fans and everyone that believed in our vision. Get ready for the new name in horror rock 'n' roll... VAMPIRES EVERYWHERE!"

"I Can't Breathe", the first track to be revealed from the new album, recently premiered with Alternative Press and received an overwhelming positive response.

VAMPIRES EVERWHERE!'s full-length debut, "Kiss The Sun Goodbye", was released in May 2011 through Hollywood Waste/Century Media Records. The CD was recorded with producer Fred Archambault, who has previously worked with AVENGED SEVENFOLD and DEFTONES.