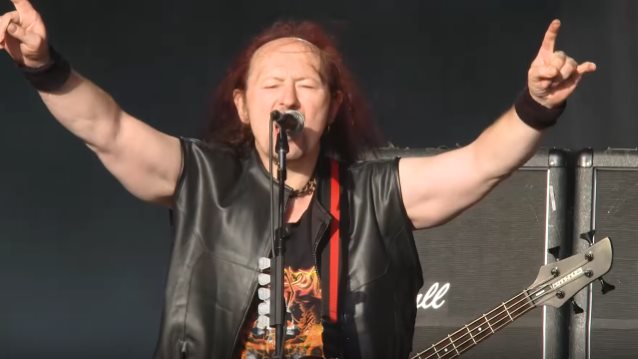 VENOM Frontman On METALLICA: 'They Put In The Hard Work, And They Eventually Developed Their Own Style'

EMP Live TV recently conducted an interview with British black metal pioneers VENOM. You can now watch the chat below. A couple of excerpts follow (transcribed by BLABBERMOUTH.NET).

On bands like METALLICA, SLAYER and EXODUS being influenced by VENOM in the early days:

Conrad "Cronos" Lant (bass, vocals): "They put in the hard work, and they did eventually develop their own style. People say that first METALLICA album sounds like the first VENOM album. That's where they started to get their ideas from. Then they developed their own style and went out, put a lot of hard work in, and fucking the rest is history. So it's great that they started off wearing 'Welcome To Hell' shirts. We used to find it really difficult finding bands to tour with, because there wasn't a lot of bands like us. So when the METALLICAs and the SLAYERs and the EXODUSes, when they came along, it was great, because then we could put a package together that we knew the crowd would be into. Because it was pointless, us going on the road with some lame rock band from the '80s. I mean, we did it — we took some bands out in the early '80s, and the crowd spat on them. So it was great when these other bands came out."

On VENOM constantly moving forward and refusing to live on its past glories:

Cronos: "We're not just sort of playing the first couple of albums in some dingy little club, because that's a tribute band. That's not a band that's writing albums for tomorrow and getting out there and coming up with new ideas. VENOM have always been controversial, VENOM have always done something new, surprised people, so I don't see the point in just playing those first couple of albums. Apart from the fact that the majority of the people who like those albums are our age and don't probably even go to gigs anyway. The fans who come to our shows are all shouting for the new album, so we're still doing what VENOM have always done."

VENOM's latest album, "From The Very Depths", was released in January 2015 via Spinefarm.