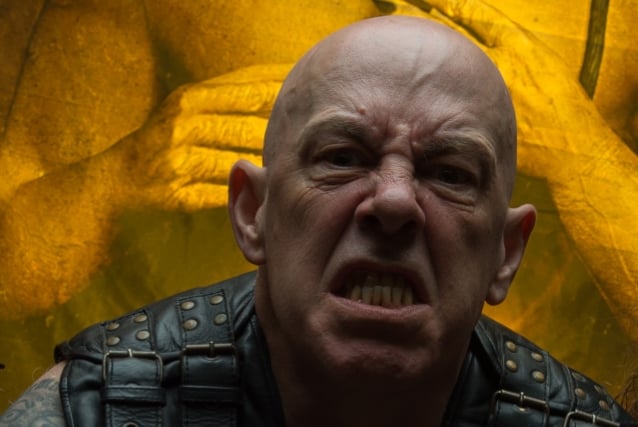 Headbangers Lifestyle conducted an interview with VENOM INC. frontman Tony "The Demolition Man" Dolan at this year's Alcatraz Hard Rock & Metal Festival, which was held earlier this month in Kortrijk, Belgium. You can watch the entire chat below. A few excerpts follow (transcribed by BLABBERMOUTH.NET).

On the health of guitarist Jeff "Mantas" Dunn, who recently suffered a heart attack and rejoined his bandmates on stage in Finland:

Tony: "It was great. We had to cancel a few things, of course because he had the heart attack, but it was a genetic thing. We were doing a lot of work. We've done an Asian tour, Australia, New Zealand, then came straight back and started the European tour. At the end of it, we thought maybe it was the workload because we were quite tired, jetlagged and everything, but it was a hereditary thing, so it could have happened at any point. He had signs of it, so go to the doctor's if you don't feel well and he didn't go! We Skyped one morning. He said, 'I've got to go to the chemist. I think I've got indigestion.' A half hour later he actually died and they had to save his life. It was quite a big thing. Physically, you recover, but mentally, it's a bit more difficult. You need to talk to people. You can say, 'It's great, don't worry. It's all fixed.' But, mentally, unless you've died, how do you say it to someone? I think for him, he had a great fear for this. Finland was important on many levels, but also for him to do it again. How did he feel? Could he recover? It was great. It was so important and it meant so much and to turn around to see him there because he's my brother. It was wonderful. At one point during the set, I went across to him, he's playing a solo, he's smiling and I said, 'You're not dead? This is amazing! Look, he's a zombie!' He laughs at himself, but it was very difficult. When we've lost so many artists, MANILLA ROAD [Mark Shelton], just happened, so many of our friends and peers are dying of all kind of things, you always see it, but you don't think it's going to be us, then it happened and you're like, 'Oh, my god!' I think we appreciate more what we do, the privilege of what we do, being onstage with the fans and how they drive us and feed us. That's a truly incredible thing. He even appreciates it even more than he did."

On whether he thought VENOM INC. would return to the stage after Dunn's heart attack:

Tony: "We had lots of things booked. The agents, the promoters and everybody promoting things were then going, 'Tony, what's going to happen?' I said, 'Until we do something, we don't know.' He may have walked onstage and came off and said, 'I can't do it anymore.' He may have said, 'Yep. It's great.' He wanted to. He's a very hard-working person, so he's very inspirational and music is everything to him, so the idea he may have lost that, I think, drove him. To play the first show we did, it was only ten weeks since he actually died. People were, like, 'Oh my god!' But that's his drive. It's not easy. It's probably going to take a little bit longer to be perfect again, but, there's something about music that I've always said, when we go to China or Venezuela, or a million places where I don't speak the language, they are trying to communicate, but when we play music, it doesn't matter where you are, everyone sings 'Countess Bathory', everybody sings 'Black Metal', it's like you realize that it transcends everything and you have that emotional attachment. I think that's what he needed. He needed to have that support when he went onstage and all of those people were giving him that adoration and that love and happiness that he was there, I think that made him stronger. That's what's good about it."

On whether he appreciates this incarnation of VENOM INC. more than before:

Tony: "Yeah, because everyone knows the mess that was VENOM and the ins and outs, but at the end of the day, we come from a small place in England and we all grew up with each other, so it's kind of like friends and old girlfriends are all having a go with each other, but fundamentally, when this happened to Jeff, everybody came together for him. We all came together. Even [current and former VENOM members] Cronos [Conrad Lant] and Antton [Anthony Lant], everybody all came together. That's where you see the reality of things. I think for now, what is important for me is to put this together, even Cronos was there doing what he was doing, all of the people were important and the legacy of the music of was what was important. I was looking at this and thinking there's a whole breed of new fans that I want them to connect all of the dots. A young girl, 22, did an interview with me, a French girl, she said, 'It's so great to do an interview because all of this history, I only read in a book because I wasn't there.' I said, 'This is living. You are here.' At the time we spoke, Lemmy [Kilmister] was still alive, so you have MOTÖRHEAD, JUDAS PRIEST, BLACK SABBATH, SLAYER, METALLICA and every other band, all the genres around, I said, 'You're living this right now.' That's what I wanted to do. I want to show the young kids that this is where we all began, but it's continuing. If we can go onstage with someone who's had a heart attack and died and inspire a 16-year-old dude who said 'I can do that too.' That's what it's about. The music inspires us and that's what we're here to do."