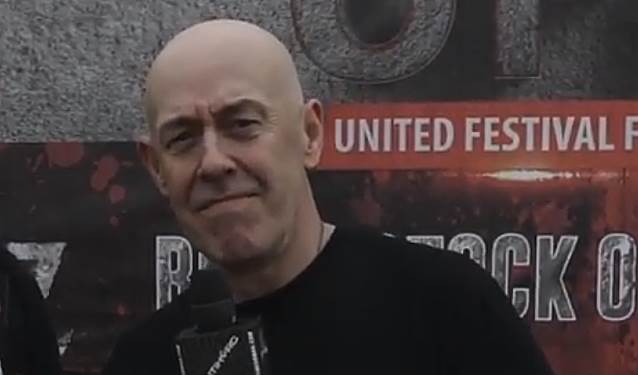 VENOM INC. frontman Tony "Demolition Man" Dolan has confirmed to AntiHero Magazine that the band is putting the finishing touches on the songwriting process for its sophomore album. "We've already got it ready," he said at this weekend's Bloodstock Open Air festival (see video below). "It'll be out in March of 2019. We're a machine now."

According to Dolan, VENOM INC. is planning to continue making new music while playing live shows that feature a setlist culled largely from VENOM's early catalog.

"Time is running out, and I know it's running out, and this is what I wanna do," he added. "And when I watched my hero Lemmy go out on stage, going, 'This is what I'll do,' knowing that he was going, but he didn't stop. That inspired me to go, 'That's what I wanna do. I wanna go out playing music.' That's why I'm here. So, yeah, the more we can write, the more we can do… brilliant."

Bray hasn't toured with VENOM INC. for the past few months as he focuses on family life following the birth of his daughter. He has since been replaced by Jeramie Kling of the Tampa-based melodic death metal band THE ABSENCE.

VENOM INC. is not to be confused with the Cronos-fronted version of VENOM, which is continuing to tour and make albums under the VENOM moniker. Joining Cronos in that group are Rage (a.k.a. Stuart Dixon) on guitar and Danté (a.k.a. Danny Needham) on drums.