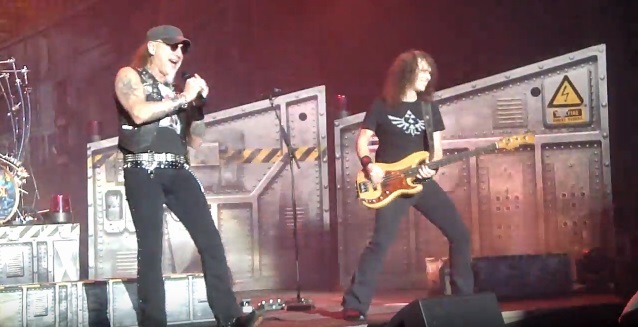 Fan-filmed video footage of ACCEPT's February 17 performance at Logomo in Turku, Finland can be seen below.

ACCEPT guitarist Wolf Hoffmann told Brazil's Heavy Talk that it's "very important" for his band to continuously write new material. "We felt when we got back together with Mark [Tornillo, vocals] or we got a 'rebirth' about ten years ago, we made a vow that we're not going to be a nostalgia band," he explained. "We really didn't want to be a band who plays old stuff over and over again because there's enough bands doing that already. We felt if we're going to do this, we want to do it right. We want to write new material that can be on an even level with the stuff that we've done in the past and by all accounts, I think we've achieved that with these last four albums. That's maybe one reason why we've made four albums in nine years, plus a live DVD. I think we've been really productive in all these years. I think we're going to do that as long as we can. We like it. It's fun to do stuff that's relevant and meaningful to people. That's really the main motivation for us is to have stuff that is relevant."

Hoffmann added that ACCEPT doesn't "really have any specific goals" for the future. "Maybe a Nobel Prize for heavy metal," he joked. "But that's unlikely. I don't know, man. We just enjoy what we're doing. I don't think there's as much you can really work for in our stage right now. We're totally happy where we are. We always want to get bigger and always want to make better albums. That's always my goal. Right now, we have so many things in our pipeline that I don't even know where to begin. We're plenty busy right now."

ACCEPT's latest album, "The Rise Of Chaos", was released last August via Nuclear Blast. The cover artwork for the disc was created by the Hungarian artist Gyula Havancsák.