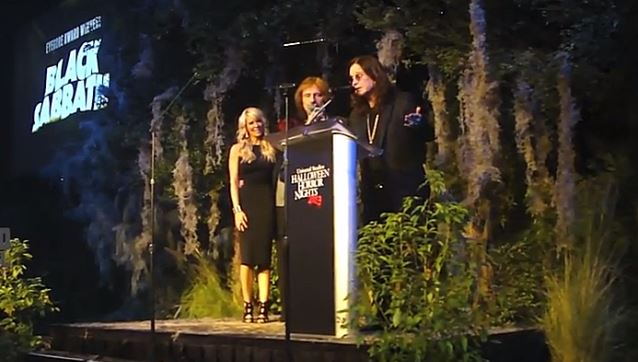 Hollywood.TV and Dread Central have uploaded video footage of BLACK SABBATH's Ozzy Osbourne and Geezer Butler being honored at the Eyegore Awards show at the Universal Studios themepark in California on September 20. They were recognized for their achievements in horror and sci-fi entertainment.

Sharon Osbourne introduced her husband and his band and talked about the group's comeback album, "13", saying, "Rock and roll from the very beginning has always been very, very dangerous... and over the past 45 years, one legendary band has not only lived up to this reputation and more, but with their extreme volume, riff-based songs and dark, demonic subject matters, BLACK SABBATH have enjoyed their well-deserved stature as the darkest performers in rock and roll. The band literally invented the words heavy metal."

In his acceptance speech, Ozzy said: "I don’t know what to say, really. It’s been an amazing year, as Sharon just said. We had a No. 1 record and a No. 1 world tour, and now this. What more can I say? Thank you very much, everybody. God bless you."

Following the awards show, Universal launched its annual annual Halloween Horror Nights attraction, which this year features a BLACK SABBATH-inspired haunted maze. The maze is based on the darkest lyrics from BLACK SABBATH's biggest hit songs and is the only attraction at the horror event to incorporate 3D video. It also includes scenes inspired by "13".