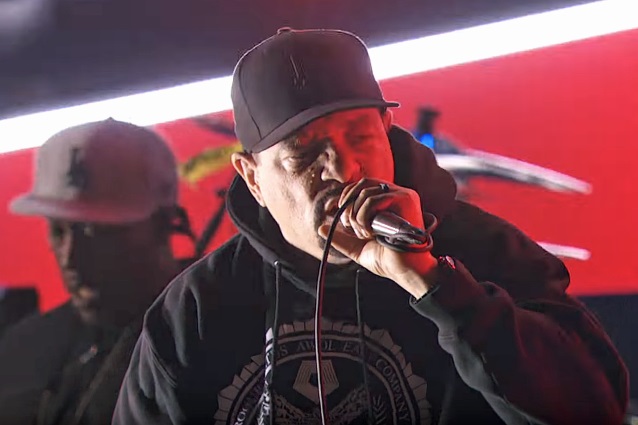 BODY COUNT performed the song "Black Hoodie", which was nominated in the "Best Metal Performance" category at this year's event. Also nominated in the same category were MASTODON, MESHUGGAH, AUGUST BURNS RED and CODE ORANGE.

Although BODY COUNT didn't win the award (that honor went to MASTODON),Ice-T said in a pre-performance, red-carpet interview that he was surprised to hear about the nomination.

"[When I first heard about it] I'm, like, 'No. That's a joke. BODY COUNT? Are you serious?' Then they said, 'Now they want you to perform.' So we're going to perform at the pre. I'm, like, 'You've gotta be kidding me. The Grammys?' So we're just overwhelmed, we're excited."

"To be picked and nominated is still a great achievement for my band," he added. "We've been around over 20 years and we're happy to be here."

"Black Hoodie" is taken from BODY COUNT's latest album, "Bloodlust", which was released in March 2017 via Century Media Records.