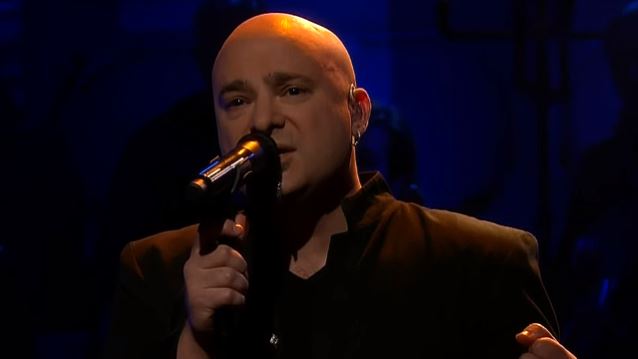 Video: DISTURBED Performs 'The Sound Of Silence' On 'Conan'

DISTURBED performed its cover version of SIMON & GARFUNKEL's "The Sound Of Silence" on last night's (Monday, March 28) episode of Conan O'Brien's nighttime talk show, "Conan". You can now watch the performance below.

DISTURBED frontman David Draiman told Philadelphia radio station 93.3 WMMR that the band has been "blown away" by the response to its version of "The Sound Of Silence". Draiman explained: "We're pretty blown away — and surprised, to be honest — by the amount of positivity that has surrounded the cover. Because it was definitely a left turn, and it was something that, to be perfectly honest, I wouldn't have intended to go to, stylistically, on my own."

Draiman said that performing the song live should be an interesting experience. "From a vocal standpoint, it's not as challenging as you might imagine, but from a production standpoint, that will be challenging," he said. "We've talked about bringing out either a string quartet or maybe trying to get local orchestras to maybe be a part of it or whatever the case may be. We've talked all kinds of things and it's a very significant production nightmare, but I think it's definitely one we're heading down the road for."

Draiman said that it took him three hours to record the vocals for the song — the longest vocal session of his career — and recalled hearing it three days later. He explained, "[I] was kind of tearing up listening to it, because it had been so long since I have allowed myself to go to that place vocally, and hearing it, and hearing it come out as well as I thought it did was not just gratifying, but like having a weight lifted off me."

"The Sound Of Silence" is taken from DISTURBED's sixth studio album, "Immortalized", which was released in August.

The album debuted at the top of the Billboard 200 chart, making it DISTURBED's fifth effort in a row to enter the chart at Number One, a feat shared only with METALLICA and DAVE MATTHEWS BAND.