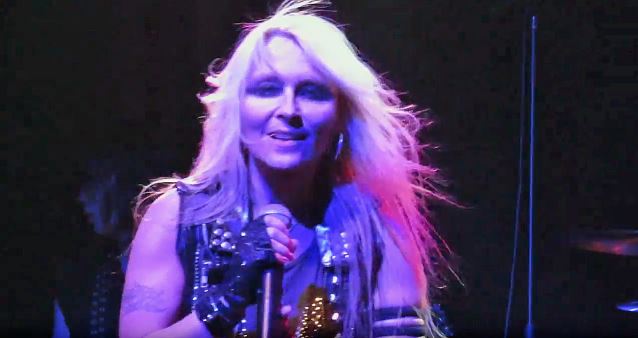 Video: DORO's 'Without You' LEMMY Song Dedication In Atlanta

Fan-filmed video footage of Doro Pesch's March 1 performance at Variety Playhouse in Atlanta, Georgia can be seen below.

In a recent interview with I'm Music Magazine, Doro was asked if the passing of MOTÖRHEAD mainman Lemmy and other rock icons ever made her stop and question her own mortality. She responded: "Yes, it really does make you think, and I always thought that Lemmy would outlive us all. He was someone who was always there, and he was actually the first musician that I ever met back in 1984. I couldn't speak English at all when I first met him, but we became friends instantly. We had some cigarettes and whiskey cola and it was really great; ever since the friendship deepened after that, and we toured together."

She continued: "My first collaboration was a song with Lemmy that he wrote in 2000 called 'Alone Again' and it was a beautiful acoustic guitar song. We did the MOTÖRHEAD classic 'Love Me Forever' and the last duet was on 'It Still Hurts' on 'Raise Your Fist'. We always talked or text messaged each other and we would always try to visit each other when we were out on tour.

"The last time that I saw him was about two months ago and we had just started the touring going to England. We had one last rehearsal and everyone was saying that we would have to rehearse all night long, but I knew I had to see Lemmy. He was playing in my former hometown in Germany, so I went to see him and the show was great. I went to see him backstage and I congratulated him on his sold-out tour and he told me that he was too old to enjoy it. It brought tears to my eyes when he said that, because he sounded so serious. A friend called me later when I was in New York and told me that Lemmy's health was going so well and that Lemmy's doctor was thinking that he might not survive the night.'

Doro added: "I went to the funeral in L.A. and everybody was there, including Ozzy Osbourne, Rob Halford, METALLICA, Dee Snider and Gene Simmons and everybody that I grew up with. It was a mixture of being super sad, plus trying to keep that spirit up that Lemmy had about him. I wrote a song when I was flying there and it's called 'Living Life To The Fullest' and it's for Lemmy. I hope that we can work on it in the studio soon because it's just a demo right now. I think it will be on the new record coming out next year. Then there was also Jimmy Bain [RAINBOW, DIO], who was super nice, great guy and a sweetheart; he was on my second big tour in 1987 when we toured with Ronnie James Dio. I love and miss Ronnie so much and between Lemmy and Ronnie, they are definitely two of my favorite people in the world and my closest friends. They're gone and it feels a little bit strange and lonely without them."

Doro will release her new single, "Love's Gone To Hell", on April 1 through Nuclear Blast.

A visually stunning music video for the song was recently filmed in superior locations such as the renaissance castle Bückeburg.

"Love's Gone To Hell" will be released in two formats on April 1 and can be pre-ordered now.

The "Love's Gone To Hell" six-track maxi single will also contain — in addition to three versions of "Love's Gone To Hell" (radio, single and demo edit) and the duet with Lemmy — two live tracks: "Rock Till Death", featuring Hansi Kürsch (BLIND GUARDIAN) and "Save My Soul". Both live tracks deliver a great insight into the long-anticipated DVD called "30 Years Doro - Strong & Proud", which will be released in June via Nuclear Blast. It features the Doro anniversary shows in Wacken and Düsseldorf, including spectacular tracking shots as well as sonic perfection. Additionaly, the DVD contains tons of terrific and previously unreleased bonus material. 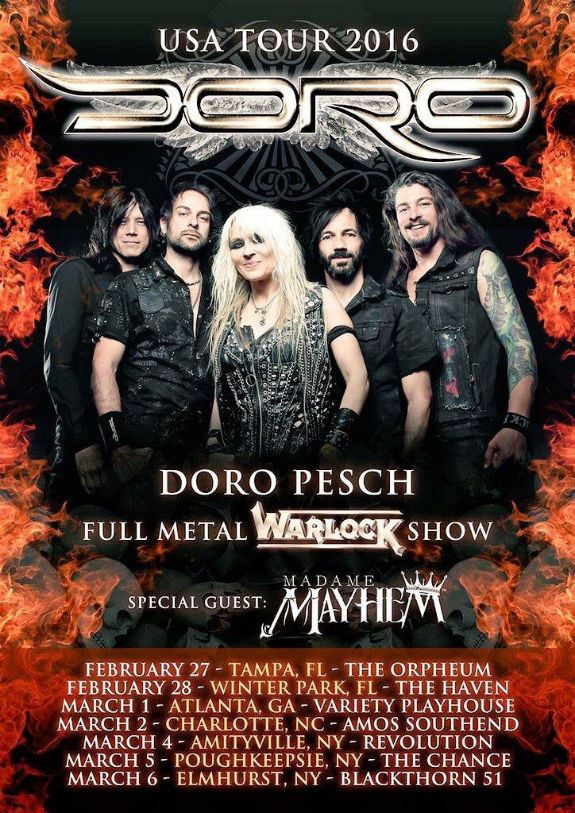