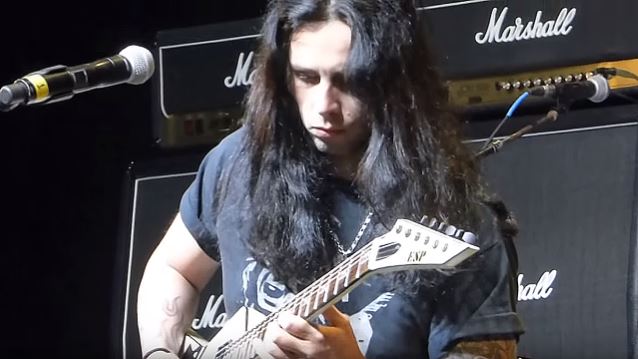 Greek guitar virtuoso Gus G. — well known in rock and metal circles for his work as Ozzy Osbourne's guitarist and as leader of his own band FIREWIND — took part in a clinic and question-and-answer session during this year's Monsters Of Rock cruise, the four-day, four-night voyage which set sail from Miami, Florida on February 22 and returned on February 26. You can watch video footage of his YouTube playlist below.

As previously reported, Gus G. will embark on a mini North American headlining tour from April 15 to April 24.

Gus's latest solo album, "Brand New Revolution", was released in Europe in July 2015 via Century Media. The CD was made available through Century Media in Australia and South America, Dismanic/eOne in North America and King Records in Japan. The cover artwork was once again created by Gustavo Sazes, who previously worked with Gus on the guitarist's debut album, "I Am The Fire", and also took care of artwork duties by such bands as ARCH ENEMY, KAMELOT and FIREWIND.