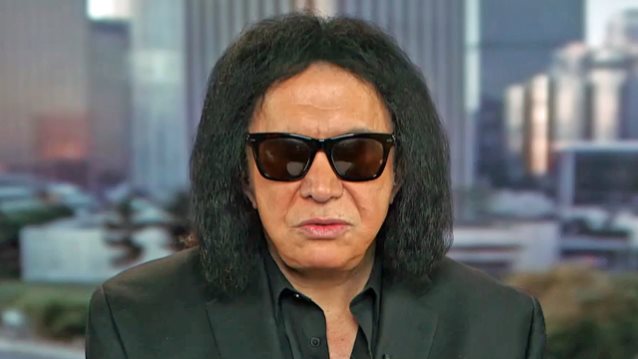 Gene Simmons was one of a number of artists who paid tribute to Chuck Berry on Sunday (April 9) at a public memorial before Berry's private funeral in Missouri.

During his seven-minute speech at the Pageant in St. Louis, Simmons said: "These shades are going to help me a lot because in back of them are real tears. He was breaking down barriers that nobody suspected. Chuck, he changed more little white boys and white girls lives than all the politicians with their big talk just by making them move. Just by grabbing a hold of them on the outside and the inside and changing their lives."

He added: "Look at what Chuck Berry and his music has done. I see white faces in the audience. When Chuck first started, that would never have happened. He broke down the barriers, made all kinds of people's hearts and minds open up to the idea that we all belong to the same people."

Shortly after Berry's memorial service, Simmons posted a note on the KISS Facebook page in which he wrote: "Sad but honored to have been invited to the Chuck Berry memorial event. The open casket was on view, but I couldn't bear looking. It would break my heart."

He continued: "For those of you too young to know, Chuck Berry was one of the founding fathers of rock 'n' roll and the architect of rock guitar playing. Without Chuck Berry, you wouldn't have had THE BEATLES, THE ROLLING STONES, Jimi Hendrix and many more."

Berry, who pioneered the rock genre with his unique storytelling and clever use of poetics, died on March 18 at the age of 90. He will undoubtedly be remembered for his signature two-note, guitar-bending lick, variations of which opened up his classic '50s hits "Johnny B. Goode", "Roll Over Beethoven", "Little Queenie", "Carol" and many more.