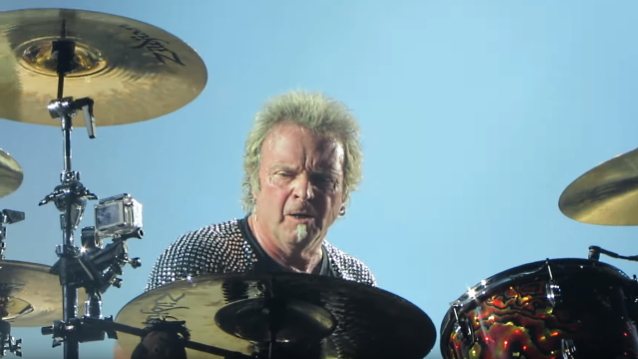 Joey Kramer says that he is "extremely disappointed" by a judge's refusal to reinstate his membership in AEROSMITH.

The Superior Court judge in Plymouth County, Massachusetts decided the drummer can't force his bandmates to let him perform with them at Sunday's Grammy Awards, even after he flew to Los Angeles and was turned away from a practice on over the weekend.

"Although I'm extremely disappointed by the Judge's ruling today, I respect it. I knew filing a lawsuit was a bit of an uphill battle considering that the corporate documents don't reference any process for a band member returning from an injury or illness. However, the band waited until January 15th to tell me that they weren't letting me play at the awards ceremonies this week. I can hold my head high knowing that I did the right thing — to fight for my right to celebrate the band's success that I have dedicated the better part of my life to helping build.

"The truth speaks for itself. Ever since I injured my foot last August and went through many hours of physical therapy to heal, not once did the band in its entirety offer to rehearse with me. That is a fact. I was also sent the full rehearsal schedule on January 18th and flew to LA the next day to rehearse and have many texts and emails stating the band can't wait for my return. That's also a fact. When I showed up to rehearse, I was greeted by two security guards who prohibited me from entering.

"The band's offer to allow me to participate in this week's MusiCares and Grammy celebrations for red carpet photo ops only, is appreciated; however, with a fill-in drummer playing on stage at two events honoring our collective musical contributions, it is extremely hurtful to me. I am a professional musician who is eager to return to my rightful place with AEROSMITH.

"I want to thank my fans for the incredible outpouring of support and for sharing my goal of taking my place on stage as one of the five founding members of AEROSMITH and continuing to play the music I love."

The 69-year-old drummer sought court intervention in the battle with an emergency legal filing on Friday. But Judge Mark Gildea ruled against him, writing: "Given that Kramer has not played with the band in six months and the dearth of available rehearsal time before the upcoming (Grammy) performances, Kramer has not shown a realistic alternative course of action sufficient to protect the band’s business interests. It is hereby ordered that the plaintiff's request for injunctive relief be denied."

TMZ has obtained video (see below) from over the weekend showing Joey arrive at an AEROSMITH Grammy rehearsal in Los Angeles, only to be turned away by two security guards. The guards make it clear to Joey that they were given the orders to refuse his entry by the other four members of the band.

An original member of the legendary rock group, Kramer last performed with AEROSMITH in April 2019 before suffering what was described at the time as a "shoulder injury." Other reports have indicated that he also injured an ankle.

For the past eight months, AEROSMITH has been performing with a stand-in drummer, Kramer's drum tech John Douglas.

"As it stands, the attempted freeze-out of Mr. Kramer is almost complete, and will result in irreparable harm to him if not remedied by this court," the complaint said.

AEROSMITH members Steven Tyler (vocals),Joe Perry (guitar),Tom Hamilton (bass) and Brad Whitford (guitar) later responded to Kramer's suit in a statement to People, saying Joey "has not been emotionally and physically able to perform with the band, by his own admission, for the last 6 months. We have missed him and have encouraged him to rejoin us to play many times but apparently he has not felt ready to do so. Joey has now waited until the last moment to accept our invitation, when we unfortunately have no time for necessary rehearsals during Grammys week. We would be doing a disservice to him, to ourselves and to our fans to have him play without adequate time to prepare and rehearse."

A source close to the band confirmed to People that Kramer had to "test" for AEROSMITH's performances this week, but says it was a result of the drummer failing to attend multiple planned rehearsals.

"They had been inviting him to come back for the last six months since he's been away for whatever medical situation he's been dealing with," the source says. "He said, 'Yes, I'll come and rehearse' and kept not showing up. On the eve of the Grammys and MusiCares, he wanted to be back."

According to the source, the band felt Kramer "wasn't capable" of performing at a level their fans were used to after listening to his demo.