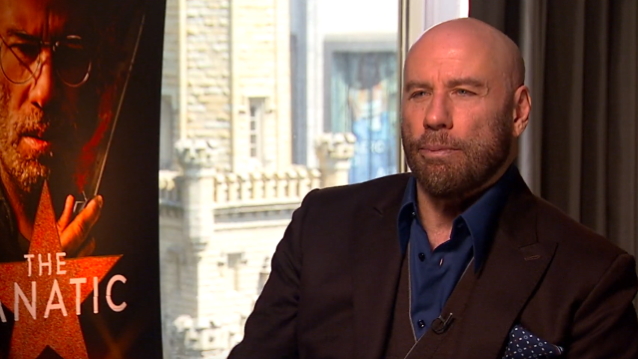 Video: JOHN TRAVOLTA Gets Tested On His Knowledge Of LIMP BIZKIT Lyrics

LIMP BIZKIT frontman Fred Durst directed the new film "The Fanatic", starring John Travolta as an obsessive fan who stalks an action movie star. Due out August 30, it is said to feel like an independent thriller film, with Travolta's unassuming-turned-dangerous stalker reminiscent of Robin Williams's transformative performance in "One Hour Photo".

During the press junket for "The Fanatic", Consequence Of Sound sat down with Travolta and quizzed him on his LIMP BIZKIT knowledge. The results of that can be seen in the video below.

Travolta recently said that Durst approached him with the idea of being in the film.

Travolta said that Durst would ask him questions about his character to prep him for his role behind the scenes.

"He would ask me questions about Moose," Travolta said. "'How are you doing today, Moose? Did you run into anybody? What do you think of so-and-so?' And he would ask me two or three minutes of improvisation and I feel it and, bam, we start filming."

"The Fanatic" is set for a limited release in theaters before becoming available to stream on Amazon.