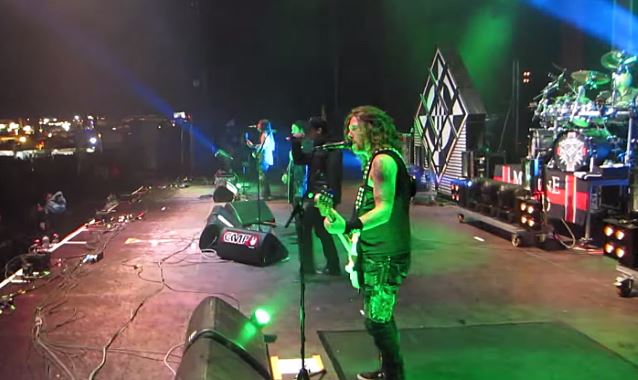 MACHINE HEAD's cover version of "Bleeding" was included on a 10-inch vinyl single which was released part of last year's Record Store Day.

MACHINE HEAD's Robb Flynn previously stated about the band's decision to record a song by IGNITE: "Sometime in late 2006, during the recording of 'The Blackening', I read a Revolver magazine review of IGNITE's 'Our Darkest Days' album by a friend of mine named Amy Sciaretto. Amy worked at Roadrunner back then, and she had always been a big supporter of our band. IGNITE wasn't a Roadrunner band so the review itself didn't feel like there was some hype behind it. It was a good (re: positive) review, but when she spoke about the political / 'fuck you' nature of the lyrics, it struck me. I had heard of IGNITE, we played a few festival dates together sometime in the '90s. I do, however, vaguely remember talking to one of the guys at the Dynamo festival in '97; well 'remember' is a strong word. I was so high on ecstasy and vodka, I couldn't tell you what the hell we talked about, though I remember thinking that he was cool. But that was it; that was my only experience with the band as I never heard any of the records.

"I've always loved punk rock, some of the first bands I ever got into were punk bands. The incredible first SUICIDAL TENDENCIES record, the mind-blowing DISCHARGE album 'Hear Nothing, Say Nothing, See Nothing', the 'Violent Pacification' EP and 'Dealing With It' by D.R.I., CRO-MAGS 'Age Of Quarrel', GBH - 'Leather Bristles, Studs, and Acne', and one of my favorite punk albums of all time, FEAR - 'The Record'.

"Back then bands were discontent, they were angry with the way things were, and they sang about. They were there to agitate, to scare, to provoke, sometimes brutishly, always honestly, occasionally even quite eloquently. They were not trying to appeal to the lowest common denominator; in fact, they hated the lowest common denominator. It was a lot different than today's bands.

"Something about the 'fuck you,' 'fuck the government,' and 'fuck everyone' attitude always appealed to me.

"These lo-fi recording didn't have the heaviest guitar tones or the tightest playing, but they had fucking attitude and fucking balls. They spoke to me in ways 'normal' records didn't.

"Reading Amy's review reminded me that I should listen to more punk, so I picked up the album, hoping for some type of musical inspiration.

"To my surprise, it was quite melodic, very So-Cal punk; it was nothing at all what I expected.

"I've never been into the So-Cal punk scene too much, even though I respected bands like BAD RELIGION and SOCIAL DISTORTION for pioneering what they did. With those bands, I really enjoyed the lyrics, but most of the time the music didn't have enough 'evil notes' for my liking. (I should probably re-visit these albums though, because I love RANCID and RISE AGAINST, both of whom owe a debt to the aforementioned bands.)

"I remember exactly where I was the moment I listened to this IGNITE record though. I was with [MACHINE HEAD drummer] Dave McClain and our then-video guy Danger Dan, and we were leaving Sharkbite Studios, going over the Bay Bridge, driving out to a show at The Fillmore in San Francisco. As soon as we left Sharkbite from a day of recording, we put this album on, and HOLY SHIT! From the opening song, the 1-2-punch of 'Our Darkest Days / Bleeding', it gave me fuckin' goosebumps!

"I got 'em right now just thinking of that very moment.

"It was fast, it was pissed, but it had hooks galore. There was surprisingly intricate guitar playing and really fantastic song arrangements. The singer Zoli, FUCK… the dude has an amazing set of pipes that defy the usual punk band ensemble, and would crush a lot of power metal singers! Dave and I kept saying he sounds like the SCORPIONS singer Klaus Meine, 'he's the Klaus Meine of hardcore!' LOL!

"This record hit us like a ton of bricks.

"It's very rare when you go on a tour that everyone likes the same music. Sometimes it's just the mood you're in, isn't it? I mean, who knows why anyone connects to a band? But this album resonated with all of us and like I said that's a rarity.

"It's been damn near 8 years since I first got this record and I can tell you, without a doubt, that not a single tour has gone by where we didn't play this record several times. For many a reason, it seems to find a set of speakers when we are having a drinking session in the dressing room with a bunch of friends. Something about it... it just fuckin' rocks... and it MEANS something. It's the unexplainable that's just bigger than 'music.'

"I went back and listened to their older albums, but it didn't hit me in the same way this record did. From what I understand, most people prefer the older stuff. I don't really know the whole story, but they broke up / went on hiatus shortly after 'Our Darkest Days' came out, and have recently reactivated.

"But it doesn't matter. Who cares what albums everybody else likes or liked?

"That's the power of music in all its unexplainable glory.

"Do yourself a favor; listen to 'Our Darkest Days'."