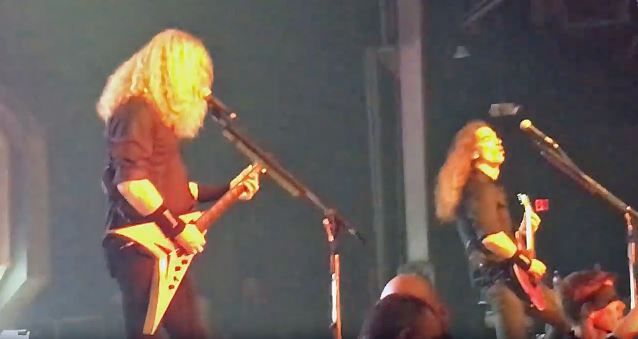 MEGADETH kicked off the North American leg of its "Dystopia" world tour last night (Saturday, February 20) at South Side Ballroom in Dallas, Texas,

In a recent interview with Full Metal Jackie, MEGADETH mainman Dave Mustaine stated about the band's setlist for the current tour: "We had to modify our setlist several times over the last couple of months of playing when we went from headlining by ourselves to playing with LAMB OF GOD in the U.K. to going down to Mexico and playing Knotfest festival. Each time the set got shorter and shorter. I'm hoping we’ll have a good 75-minute-to-90-minute setlist that we can play. Either way, we're going to try and play several songs off of [MEGADETH's latest album] 'Dystopia'."

Asked in a 2013 interview what it takes for a new MEGADETH song to stay in the setlist beyond the album touring cycle, like "She-Wolf" has, Mustaine said: "You know, a lot of it seems so scientific, but a lot of it isn't. It's just a matter of how long the set is, how high the song is singing-wise, who we're playing with... The set we did for Gigantour isn't that different from what we did for the IRON MAIDEN tour, but we took out a couple of songs, we took out 'A Tout Le Monde' and we took out 'Trust', kind of let it rip. I think a lot of people were totally surprised by that setlist for the IRON MAIDEN dates, and so was I. I thought that was a good setlist, but a lot of times you have people saying, 'Oh, you gotta play 'A Tout Le Monde'. That's your biggest song. You gotta play 'Trust'. That's your number one hit. You gotta do this, you gotta do that.' I ain't gotta do nothing. And listening to the fans, what they like, and listening to what I like. Between the two of us, one of us is going to be right. And I know that when it comes down to playing stuff that makes me feel good, I like playing the heavy stuff."

@Megadeth on the opening night of the #DystopiaWorldTour at the @SSBallroom in Dallas, TX - 2.20.2016. #Megadethpic.twitter.com/ONeeDsicmf 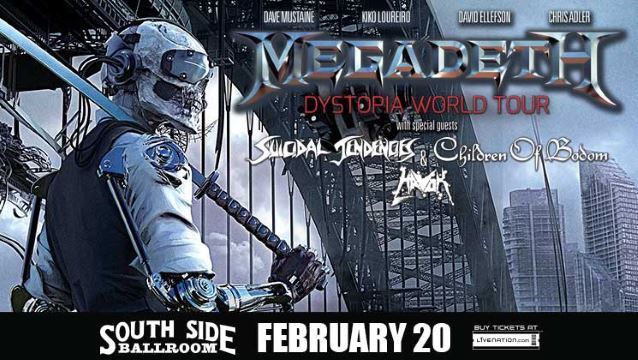