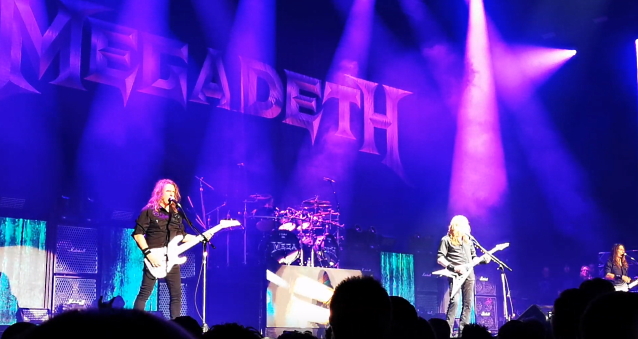 MEGADETH's classic song "The Conjuring" made its 2020 tour debut last night (Sunday, January 26) at AFAS Live in Amsterdam, Netherlands. Fan-filmed video footage of the performance can be seen below.

Mustaine previously spoke about his reluctance to perform "The Conjuring" during a 2011 interview with U.K.'s Total Guitar magazine. He stated at the time: "Performance-wise, 'The Conjuring' is one of the heaviest songs on [MEGADETH's 'Peace Sells… But Who's Buying?' album], but, unfortunately, it's got black magic in it and I promised that I wouldn't play it anymore, because there's a lot of instructions for hexes in that song. Although it seems kinda corny, anybody who's a Wiccan or a warlock or anything like that will know that all of that stuff is instrumental."

MEGADETH is currently on the road in Europe as the support act for FIVE FINGER DEATH PUNCH. The trek kicked off on January 20 in Helsinki, Finland and will conclude on February 22 in Sofia, Bulgaria. The Helsinki concert was MEGADETH's first since Mustaine was diagnosed with throat cancer and its first live appearance in 15 months.