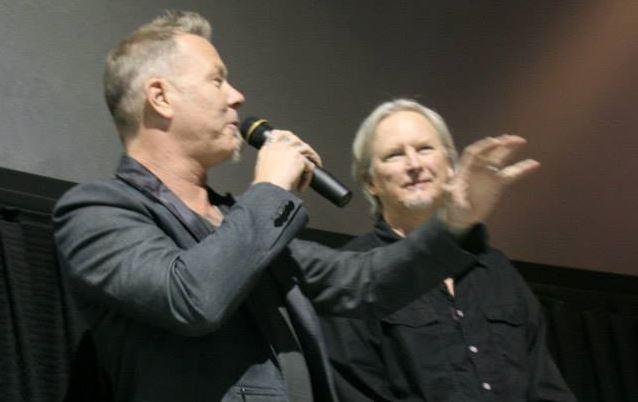 METALLICA frontman James Hetfield introduced the band’s new movie, "Metallica Through The Never", at the UA Laguna Village 12 theater’s 10:40 p.m. showing of the film on October 4 in Elk Grove, California. Check out fan-filmed video footage of his appearance below.

According to Box Office Mojo, "Metallica Through The Never" expanded to 589 locations on October 4, but in the process lost most of its IMAX screens to "Gravity", the outer-space thriller starring Sandra Bullock and George Clooney. As a result, it plummeted 56 percent to $697,763. So far, the hybrid concert movie, which was written and directed by Nimród Antal ("Kontroll", "Predators"),has earned just $2.7 million.

"Metallica Through The Never" officially opened on September 27 for an exclusive week-long run on IMAX screens. The film's surreal narrative winds its way through the concert footage, in which a roadie played by Dane DeHaan finds himself in an increasingly hostile urban environment while on a mission for the band.

Financed by the METALLICA members themselves at a budget of $18 million, "Metallica Through The Never" is the first new release via Picturehouse, the full-service independent film marketing and distribution company started in 2005, which reopened its doors with founder Bob Berney at the helm.