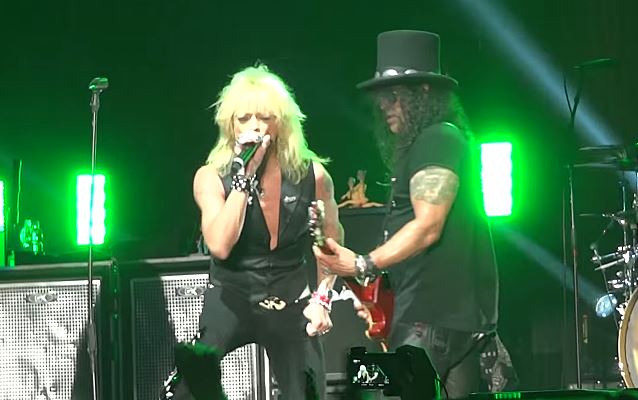 Former HANOI ROCKS singer Michael Monroe joined SLASH FEATURING MYLES KENNEDY & THE CONSPIRATORS on stage on May 28 at Jäähalli in Helsinki, Finland to perform two songs: "Doctor Alibi" and "We're All Gonna Die". Fan-filmed video footage of his appearance can be seen below.

Asked in a 2007 interview if he ever felt jealous of GUNS N' ROSES' commercial success, considering that GN'R openly cited HANOI ROCKS as a huge influence in the Axl Rose-fronted band's early days, Monroe said: "No, I never felt that! Not at all! I was always happy for their success and they definitely earned it themselves. I'm thankful for them recognizing the HANOI ROCKS influence and talking about it in the press."

He continued: "A lot of bands weren't really that talented and they sold a lot of records and really just deliberately tried to fake something out of it with the looks and not having much to back it up with. But GUNS N' ROSES really had their own thing and they were secure enough in themselves to quote HANOI ROCKS as an influence. Also, they released a lot of the old catalog in America with their Uzi Suicide label. So they were definitely paying homage to us and they were being very cool.

"I've never been envious of their success — quite the opposite; I've been very happy for them. I was part of it. I played on their records and I was happy to be part of it. It's always fun working with those guys. Slash played the right kind of guitar because he grew up with HANOI and mine and Andy's [McCoy] playing. I actually did something with him for the movie 'Coneheads'."

Asked if he remembered the first time he met GUNS N' ROSES, Monroe said: "I met Axl... he came to my video shoot in New York. I was shooting a video for 'Dead, Jail Or Rock And Roll'. He showed up and just came to say hi and he introduced himself. I got to talk to him and he was a big NAZARETH fan and I was, like, 'Wow, a NAZARETH fan!' He didn't realize that 'Not Faking It' was a cover of a NAZARETH song. He had heard the record and he was really into it and he liked the song 'Dead, Jail Or Rock And Roll', so I said 'Why don't you come up and do a couple of takes with us?' He came up on stage and he ended up in the video. I got along with him great and I always had a nice time with him. I never had a problem with him. I hear all these horror stories, but he's always been cool with me. It was fun working with those guys afterwards. Playing sax on their record and we did the duet 'Ain't It Fun'. That was magical and they have great star quality. A great band and it's a shame that they didn't stay together."