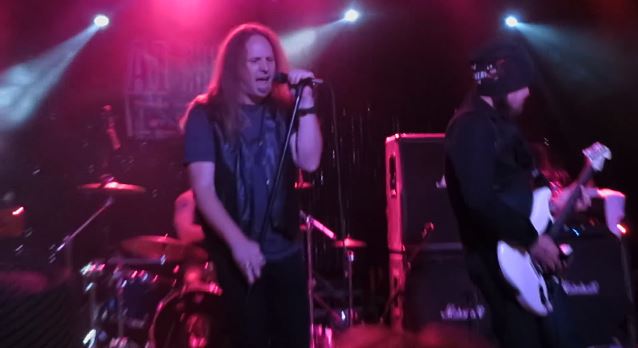 The new lineup of RED DRAGON CARTEL, the band led by former OZZY OSBOURNE and BADLANDS guitarist Jake E. Lee, made its live debut on April 16 at Grand Central in Miami, Florida.

Video footage of RED DRAGON CARTEL kicking off the Miami concert with a rendition of OZZY OSBOURNE's "The Ultimate Sin" — with the band's new vocalist, Michael Beck, inexplicably singing the lyrics to OSBOURNE's "Now You See It (Now You Don't)" over most of it — can be seen below.

Beck is the owner, engineer, and producer at SoundVision Recording Studio in Mesa, Arizona. He has worked with such acts as SOILWORK, MARILYN MANSON, ABIGAIL WILLIAMS, THE BLACK DAHLIA MURDER and DAATH.

Bassist Greg Chaisson announced his departure from RED DRAGON CARTEL last month. He said in a statement: "I'm afraid to say real life just jumped right up and got in the way of my good time. I can no longer take any more time away from my regular job. I want to thank everyone in the RED DRAGON CARTEL organization, and most of all, my best friend Jake E. Lee. And a very special thanks to all of you who have treated me so great! They will continue on without me and it will be fantastic as always."

RED DRAGON CARTEL's self-titled debut album sold around 5,000 copies in the United States in its first week of release to debut at position No. 69 on The Billboard 200 chart.