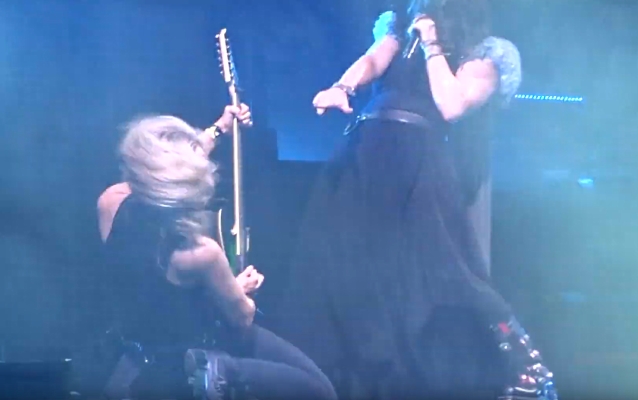 Nita Strauss joined EVANESCENCE on stage this past Friday, May 10 at the the Epicenter festival in Rockingham, North Carolina to perform the song "Disappear". Fan-filmed video footage of her appearance can be seen below.

Back in 2015, EVANESCENCE's Jen Majura revealed that Strauss was on singer Amy Lee's short list of candidates for the guitarist slot in the band before Majura herself landed the gig.

EVANESCENCE has around two dozen live appearances scheduled this spring and summer, with plans to spend the rest of the time writing material for its long-awaited follow-up to 2011's self-titled effort.

The band spent much of the last two years recording and touring in support of 2017's "Synthesis", which contained some of EVANESCENCE's best-loved songs — as well as a couple of new ones — reinvented with full orchestra over a deep electronic landscape.