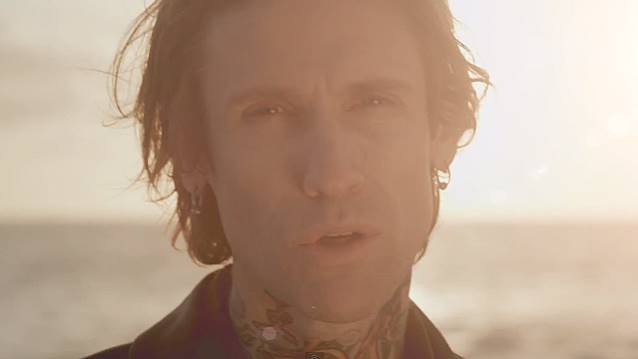 Video Premiere: BUCKCHERRY's 'Dreamin' Of You'

"Dreamin' Of You", the new Shan Dan-directed video from Californian rockers BUCKCHERRY, can be seen below. The song comes off the band's sixth studio album, 2013's "Confessions", which sold 18,000 copies in the United States in its first week of release to land at position No. 20 on The Billboard 200 chart.

BUCKCHERRY frontman Josh Todd tells Loudwire about the clip: "I grew up in Orange County, California, and before I got into music, when I was super young, I would surf every day and I wanted to be a pro surfer. So I spent a lot of time at the ocean, sitting on the beach thinking and I had a lot of things in my head that came from just sitting and looking out at the ocean."

He adds: "It's always been something very peaceful for me and that's what I wanted to capture in the song. I just felt like it fit the song. So to go down there and have a nice time and sit by the campfire and sing a song, that's what 'Dreamin'' kind of feels like to me. So that's why we did it. It was something really simple and cool."

As previously reported, BUCKCHERRY has completed work on a new EP that will follow up last year's "Confessions" album. Todd revealed the news in an interview with PopCultureMadness.com, saying, "We just made an EP that we're gonna be releasing in the spring that we're really excited about. I don't wanna give it away yet, but there's definitely a theme to this EP, and if you're a BUCKCHERRY fan, it's a must-have. So it's really cool, and probably one the funnest times I've had writing songs."

BUCKCHERRY will be on the road this month, starting on March 12 in Anaheim, California.