"Death By Design", the new video from NWOBHM pioneers DIAMOND HEAD, can be seen below. The song is taken from the band's upcoming album, "The Coffin Train", which will be released on May 24 via Silver Lining Music.

With a mean, driving riff that resembles a thunderous machine gun, "Death By Design" is a powerful track. It is a song that takes the listener along for one hell of a ride which promises to put the fire back in the spirit of anyone daring to jump aboard.

Says guitarist Brian Tatler: "Death By Design' is the second song from the new DIAMOND HEAD album, 'The Coffin Train', to be released. This song began life in my home studio in 2015. I had the opening top E string riff and tried to build a song around it. I gave a demo to Ras [singer Rasmus Bom Andersen] and he added a new verse riff. We worked on the arrangement and made another demo early 2017 before trying it out in rehearsal. It has a four-bar guitar solo that was recorded in a hotel room on Ras's laptop while on tour, another first for DIAMOND HEAD!"

Rasmus adds: "Contrary to the title, 'Death By Design' is not a song about death but about life. It's about choosing life, your path and on your terms. It's saying 'no' to rotting in the giant hamster wheel and drowning in pre-conceived notions of 'the good life' checklists, so that when you're done and heading down into the fire, you can wear that big smile saying you did it your way and had one hell of a ride."

On the video production, Rasmus continues: "We've shot the most videos the band has ever shot for an album launch. The music video for 'Death By Design' was a tough one to shoot right. We don't exactly have Hollywood budgets for the production, but our director on this song, Russell Cherington, has been a massive support in shooting a rather fantastic video. We wanted to create something that resembled a descent into hell and follow the concept from the lyrics. We hope everyone will enjoy the second single and video and that it might inspire them to live life on their terms."

"The Coffin Train" was recorded at Vigo Studios in Walsall, Circle Studios in Birmingham and Raw Sound Studio in London, and is the second DIAMOND HEAD album to feature Rasmus Bom Andersen, who joined the band in 2014.

"Rasmus is a big part of why the album, and band, sound like we do," says Tatler. "He has a fantastic vocal range, knows exactly what to do with his voice and is incredibly knowledgeable about it.

"All along, we wanted to make sure we didn't lose sight of what we call 'The Brief.' I would never want to deny our NWOBHM style and sound; that's what originally got me excited and DIAMOND HEAD noticed. And I still enjoy the creative journey we go on."

Formed in 1976 under the riff-rolling leadership of guitarist Brian Tatler, DIAMOND HEAD would quickly establish themselves as a vanguard of the exploding New Wave Of British Heavy Metal scene. With their genre-defining debut album "Lightning To The Nations", DIAMOND HEAD has influenced and opened gates for many metal bands. 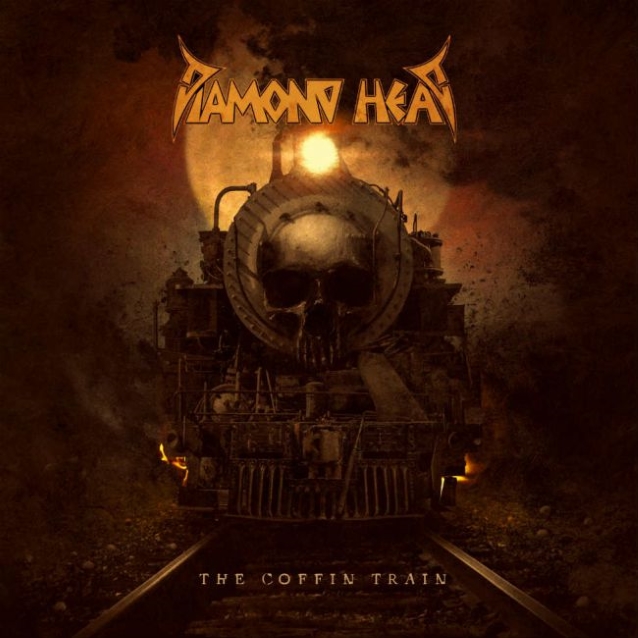