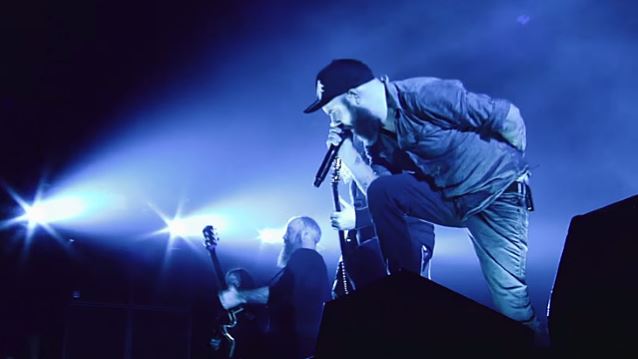 "Paralyzed", the new video from Swedish metallers IN FLAMES, can be seen below. The clip was directed by Patric Ullaeus of Revolver Film Company, who has previously worked with DIMMU BORGIR, LACUNA COIL, DARK TRANQUILLITY, SONIC SYNDICATE and KAMELOT, among others. The song is taken from the band's latest album, "Siren Charms", sold around 9,000 copies in the United States in its first week of release to debut at position No. 26 on The Billboard 200 chart.

IN FLAMES singer Anders Fridén stated about "Paralyzed": "First, I don't like describing this song, because when you are watching this or listening to the album, you'll be, 'Okay, that's what it is,' because I want it to mean something for you. But 'Paralyzed', I think, it's something that we, as IN FLAMES, are known for these days. There's a groovy verse and a big big chorus. I think it sounds great. It's meant to be listened to loud."

"Siren Charms" was released in the U.S. on September 9, 2014 via Sony/RED. The CD was recorded at Hansa Tonstudios (DAVID BOWIE, DEPECHE MODE, U2) in Berlin, Germany. The cover artwork was created by Blake Armstrong of Space Boy Comics.

IN FLAMES filmed a new concert DVD/Blu-ray on November 6, 2014 at Hovet in Stockholm and November 7, 2014 at Scandinavium in Gothenburg, Sweden. An early 2015 release is expected.