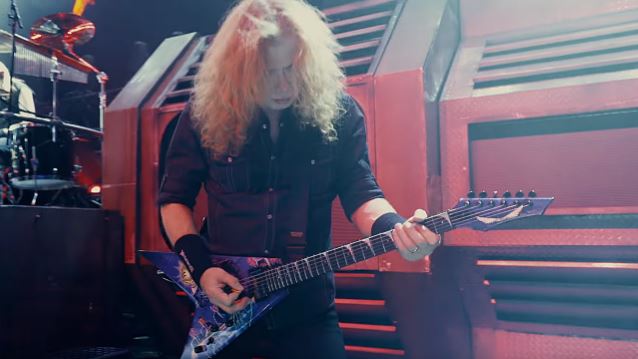 MEGADETH's official video for the instrumental song "Conquer Or Die!" can be seen below. The track, which is taken from the band's latest album, "Dystopia", showcases the classical-style acoustic guitar playing of the band's Brazilian lead guitarist Kiko Loureiro. "He plays so many different instruments, too!" MEGADETH mainman Dave Mustaine told Revolver magazine. "I walked into Kiko's hotel room in Japan, and there's a silver flute on his bed. And [David] Ellefson [MEGADETH bassist] goes, 'That was him? I thought I heard some dude shredding on the flute last night!'"

Mustaine told Music Radar earlier in the year that Loureiro's lead playing complements his instinctual and animalistic style in much the same way as Chris Poland and Marty Friedman did through the '80s and '90s.

"I think that Kiko has a lot of what Chris Poland and Marty Friedman were capable of doing," said Mustaine, before noting that he often vocally authored Poland and Friedman's solos.

"There's enough video footage of me with other players singing the solos to them. The way that we approach things in the studio is very simple. We have a three-pronged approach; there's your way, our way, my way. We'll listen to a solo they come up with, and if it's a great solo, so be it. If it's really good, I will make some suggestions to take it to what I think is that place, and if it's not right, then I'll say, 'Let's try this instead.'

"You listen to their ideas... That respect that you give to another performer, man, you get a performance outta them that sometimes is absolutely mind-blowing. The solo [Kiko] did on 'Conquer Or Die!', I didn't tell him how to do that, but I had been encouraging him for weeks to do something like [VAN HALEN's] 'Eruption'."