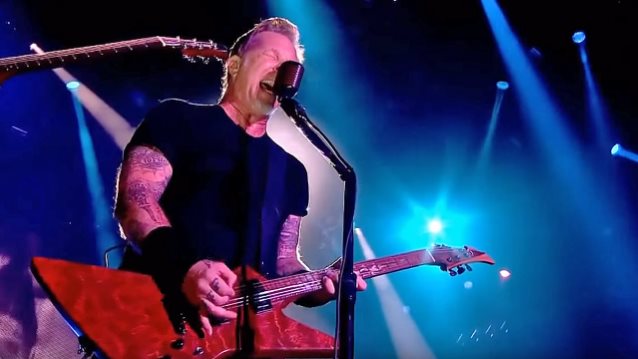 In an unprecedented move for METALLICA, the band is releasing music videos for each song from their forthcoming album, "Hardwired… To Self-Destruct", starting today at 12:00 p.m. EST on Metallica.com and simultaneously with editorial partners around the world for every two hours. New songs and their videos will premiere right up to when the clock turns over at midnight in New Zealand, where the first official copy of the new album will be available worldwide. The videos — shot around the globe — will give fans the opportunity to hear the long-awaited METALLICA album two days ahead of its official November 18 release via Blackened Recordings.

METALLICA's "ManUNkind" video — which is described as "the ultimate tribute to the forefathers of black metal" — can be seen below. The clip was directed by Åkerlund, the original drummer of BATHORY, one of the first black metal bands, who made his mark directing music videos for artists from Madonna and THE ROLLING STONES to MAROON 5 and Beyoncé. These have won him a host of awards including several Grammys, an MTV VMA, MVPA Hall Of Fame award and more. Åkerlund has also directed a number of feature films, including cult favorite "Spun" starring Jason Schwartzman, Mickey Rourke, Brittany Murphy and John Leguizamo.