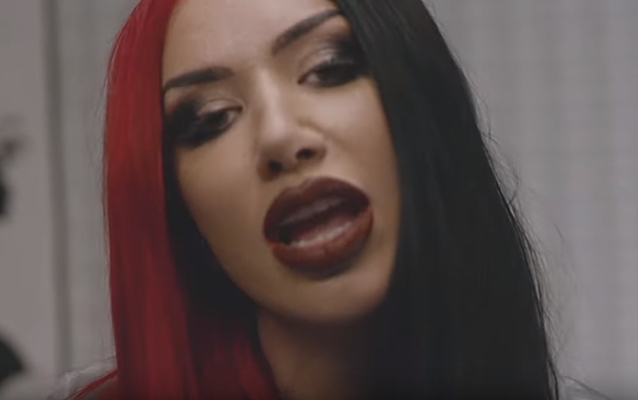 NEW YEARS DAY's "American Psycho"-inspired music video for "Shut Up" can be seen below. The clip was directed by Galileo Mondol (Raging Nation Films) and stars Sirius XM's Jose Mangin and the original ax from "American Psycho",.

"When we recorded the song 'Shut Up', I knew right then and there, on that day, straight away, what I wanted to do if we were ever to make a music video for it," states NEW YEARS DAY frontwoman Ash Costello. "It came to me immediately. So when the time came and 'Shut Up' was chosen for a music video, I was thrilled because it meant that I'd get to make my vision come to life, which was to recreate one of my favorite horror movies of all time, 'American Psycho'."

"Unbreakable", NEW YEARS DAY's fourth studio album, was produced by Mitchell Marlow (ALL THAT REMAINS, IN THIS MOMENT) and Scott Stevens (HALESTORM, SHINEDOWN). Released on April 26 via RED Music, it is the follow up to the band's 2015 LP, "Malevolence", which hit No. 45 on the Billboard 200, thanks to the radio hits "Defame Me" and "Kill Or Be Killed".

NEW YEARS DAY is currently on the road in the U.S. with FALLING IN REVERSE. The band will continue to tour for the remainder for 2019.