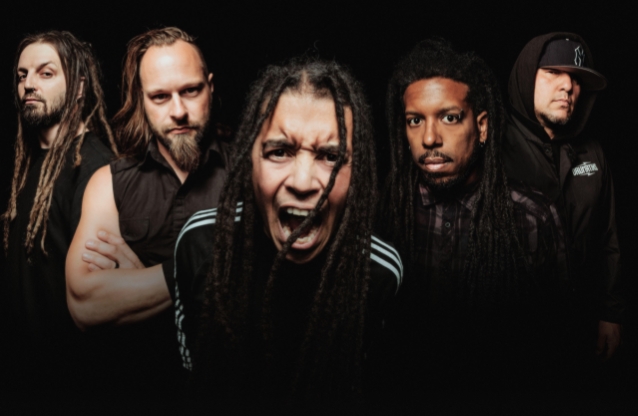 NONPOINT has released a music video for the song "Fix This", directed by Eric Richter. Check it out below.

"There are two sides of everything that's broken," said singer Elias Soriano. "One side lives in the world of destruction and the other in the world of repair. The song 'Fix This' dives into what it feels like to be on both sides of the fight."

"Fix This" appears on NONPOINT's latest album, titled "X" and pronounced "Ten," out now via Spinefarm Records. The follow-up to 2016's "The Poison Red" was produced by Fred Archambault, who has previously worked with ATREYU and AVENGED SEVENFOLD, among others.

NONPOINT has also confirmed its summer 2019 tour plans. They will support HELLYEAH July 17 through August 17, with some additional headline shows sprinkled throughout the tour.

In a recent interview with Bods Mayhem Hour, Soriano stated about working with Archambault on "X": "It was a great process. He's a real positive dude who loves to work ideas, loves to add layers and really set a mood and add DNA to a song. He just, you know, pretty much, he loves what we were doing with the writing of our music. He just really wanted to make it sound like the most powerful NONPOINT that we've ever put out."

Elias added that "X" ended up being "the fastest record that we've ever recorded because we were so prepared going in. It was really just about tracking it, but I would say [it took about] 25, 26 days," he said. "Like I said, the music was written. It was just about making it as sound as great as we could. I mean, like I said, the songs were already written. We went in with the pre-production already done. We had already decided what we wanted. After that, it's just performance and making sure you get the right tones. Fred's a professional, Rob Ruccia is a professional. We're on our tenth record, so we went in prepared."