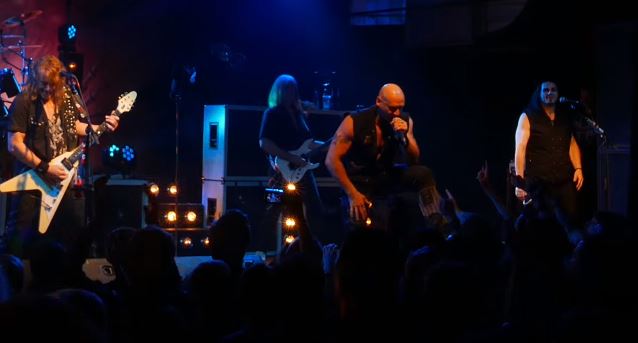 On November 3, PRIMAL FEAR vocalist Ralf Scheepers rejoined his former bandmates in GAMMA RAY on stage in Munich, Germany to perform the GAMMA RAY song "One With The World". Fan-filmed video footage of his appearance can be seen below.

Scheepers recorded three albums with GAMMA RAY before leaving the band in 1994.

In a 2009 interview with Hard Rock Hideout, Scheepers stated about his departure from GAMMA RAY: "We were together for five years. I was living still in Stuttgart, also now. GAMMA RAY is coming from Hamburg, the other members. The technology wasn't where you could swap MP3 files and load your dat files into your sessions and compose your songs that way. That is the way we are doing it now between Sweden and Hannover. Back then, it wasn't possible, the technology wasn't there. The guys wanted me to move to Hamburg. I couldn't do that. I needed to work to pay for my way of life. Music wasn't paying for it. That was one of the reasons we parted ways. The other reason is well known. I made the application to JUDAS PRIEST. I told the guys that I did it. They asked me what I would do if JUDAS PRIEST asked me to be the singer. I said I would go, without disrespect and everything. They understood, but in the end there was another factor. The feeling was not that good anymore. Before I made my application, Kai [Hansen, guitar/vocals] and Dirk [Schlächter, guitar] started singing their own songs, which is their own right, of course. In the end, it was a sign that they may not need a vocalist anymore. Everything came together within one month and we went our separate ways. [There were some] bad vibes for a couple of months. We are still friends. I don't want to talk shit about GAMMA RAY, and they don't talk shit about me. It was a good time, it was a learning phase. I really appreciate the time. I don't want to talk bad about it. It was only good."

GAMMA RAY announced last month that it had recruited Frank Beck as its second lead singer. The band explained: " Kai just felt that it's time for him to cut a bit shorter on singing, because he found out that his long touring, especially headline shows after a while, always tends to fuck up the voice and end up with something that is not a hundred percent. So sharing the vocals makes things much easier and much more pleasurable."