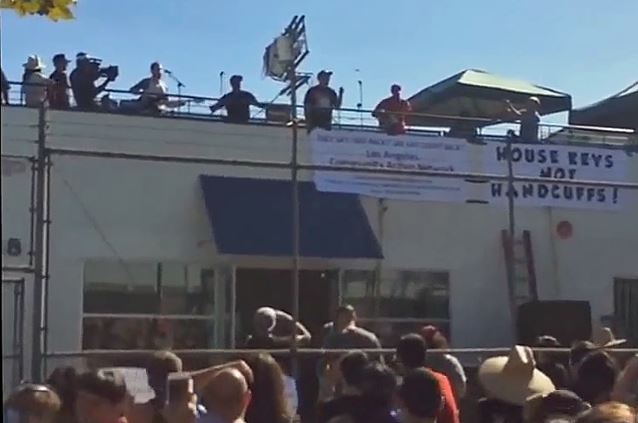 PROPHETS OF RAGE, the supergroup featuring members of RAGE AGAINST THE MACHINE, PUBLIC ENEMY's Chuck D and CYPRESS HILL's B-Real, played a free show Friday (July 15) on a rooftop in the area of downtown Los Angeles known as Skid Row.

Skid Row is a roughly 50-square-block area that is home to several thousand people either living on the streets or in one of many shelters and transitional supportive housing complexes.

PROPHETS OF RAGE guitarist Tom Morello told Noisey last month that the band would play a warmup gig on Skid Row prior to embarking on a North American tour in August.

PROPHETS OF RAGE recently entered the studio to record a brand new song called "The Party's Over", which the band premiered at its recent live shows. Helming the sessions is veteran producer Brendan O'Brien, who has previously worked with RAGE AGAINST THE MACHINE, PEARL JAM, AC/DC and STONE TEMPLE PILOTS, among others.

Morello told Billboard.com that the members of PROPHETS OF RAGE have set a very high bar for the material that they want to release. "The goal is a simple one: The music has to be devastating," he explained. "In all these interviews, we talk a lot about the politics, but the cornerstone is that the music has to be devastating and we have to not just be competitive with our legacies, but in 2016, it has to be something that goes beyond that and is very authentic, unapologetic and contemporary."

The guitarist added that PROPHETS OF RAGE is still finding its direction.

"When we got in the room, it was like, 'Well, hold on, we're getting ahead of ourselves. We have to figure out what this band's chemistry is to be great. How do we win with this team on the field?'" he said. "And that took awhile to figure out. I would say that it really came together a couple days before the Whisky show [May 31], where it was like, 'Oh, shit, that's what PROPHETS OF RAGE is going to sound like!' And it's still a process. I always look at it like it's never done and will continue to be refined as we go along."

PROPHETS OF RAGE made their live debut in May in Los Angeles, playing numbers from all three acts.

Prophets Of Rage moments before playing a show on skid row in downtown #LA. #NextStopCleveland